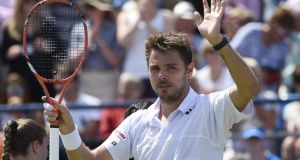 Stan Wawrinka of Switzerland celebrates beating Nick Kyrgios in the first round of the Aegon tennis championships at the Queens Club. Photograph: Facundo Arrizabalaga/EPA

Every time he raises the ball to serve, a tattoo on the inside of his left forearm might remind him that there is really no such thing as success. “Ever tried. Ever failed. No matter. Try Again. Fail again. Fail better,” reads the ink.

Samuel Beckett could appear bleak to some but in our self-help culture the words can also be seen as an optimistic, work-ethic view on life and sport in a job where failure comes more often than success. But recently Stan Wawrinka, with a career 62 per cent win rate, has being failing better and better and better.

A winner at last year’s Australian Open, the Swiss 30-year-old proved that no one, not even Novak Djokovic, beats Stan Wawrinka 15 times in a row. He defeated the world number one in the quarter-finals to close out a 14-match losing streak.

The bleary eyed ‘Stanimal’ went on to win his first Grand Slam in Melbourne before adding to it a few weeks ago in Roland Garros, again Djokovic providing him with a career-defining moment. His win stopped Djokovic’s 28-match winning streak dead.

Afterwards Wawrinka was modestly pragmatic. Although he had become one of the few players on tour that has shown a capability to bust up the big four, he is slow to accept a hard-earned pass into that club.

“I’m not as strong as the big four. They are winning everything,” said Wawrinka. “But I’m strong enough to win some big titles sometimes. For the past two years I have changed my approach. When I go deep in the tournament I rarely put in a bad performance. It’s a final, and when it’s a final, I feel confident, I feel confident in my game.

The recent history supports Wawrinka’s caution. Still, with Federer without a major title since Wimbledon 2012, Djokovic falling to him on the clay, Murray stepping into the annual pressure cooker and Nadal slipping to 10th in the seedings, there is a mood of realignment in the traditional closed shop.

But history, especially at Wimbledon, holds sway. In the last 12 years the title has been won by just four players, Federer seven times, Nadal and Djokovic twice and Murray. Contrast that with the British Open golf event, which has had 10 different winners in the same period, Tiger Woods and Pádraig Harrington the only players to have won the Claret Jug twice.

But in the last year and a half, where there have been six Grand Slams, Wawrinka has won two of them, which puts him on par with Djokovic, who has also won two. No other man has done that.

The age profile too is not as egregious as 30 years old suggests. Federer is 33, Djokovic and Murray are 28 and Nadal turned 29 at the beginning of this month. Teenage runs like that of Boris Becker to the Wimbledon title have become things of the past, with 30 becoming the new 25. Still, while others are pushing him into the elite band of winners, the Swiss is determined to keep himself an outsider.

Wawrinka trails 17-4 in his head to heads with Djokovic. But two of those wins have arrived in the last 18 months. He failed to register a single win against Nadal in their first 12 meetings, but has reversed the trend in the last two matches. He denied Nadal a second crown in Australia and beat the Spaniard for the first time on clay at the Rome Masters.

The only meeting on the Wimbledon grass came in 2009 when Murray dug out a five-set win over Wawrinka in the round of 16 before he lost to Andy Roddick in the semi-finals.

“I’m not as good as they are, I mean the big four,” he insisted after the French Open final. “But I’m quite good enough to win two Grand Slam tournaments. I can beat them in major tournaments, in a semifinal, in a final.

“But once again, the big four will always be the big four. I don’t want to be in comparison with them. I want to make progress and strides. I want to beat them. That’s all. It is as simple as that.”

There’s also an element of Wawrinka’s recent elevation that wouldn’t be lost on those who have followed the ups and downs of some sporting careers. He has been accused of quitting his family to improve his tennis career.

That accusation came from none other than his now ex-wife Ilham in a stinging statement that came in response to his announcement that the two were separating.

The TV presenter married Wawrinka in 2009 just before they had a daughter, Alexia. The couple separated temporarily in 2010 before reconciling. The statement from Ilham in April of this year was described as one that was intended to clarify the circumstances.

“No, Stan does not lose matches because of our separation (said to be painful) because it has been already five months since his triumphant return at the Davis Cup,” she said.

“His decision to leave his family for the second time did not stop him from winning the tournament in Chennai and having more or less very good results.

“No, trips and tournaments are not the cause of our separation. Besides, other players, ranked higher than him, handle family life very well. His instability, desire to regain his freedom – at all levels – are the source. And I have to admit the repeated fibs and emotional betrayals eventually entirely destroyed the confidence I had in him.”

Unspooling But his private life unspooling in public hasn’t hurt. Unlike Tiger Woods, who went into a tailspin, Wawrinka has seemingly not allowed the unwelcome attention to upset his game.

Last November Wawrinka also had a high-profile dispute with Federer after Federer’s wife Mirca – “the power behind the throne” – was heard to call Wawrinka a cry baby, during a match in the ATP World Tour Finals in London.

A blazing row erupted off court. But the two went on to beat France in the Davis Cup final the following week in Lille.

More recently, Wawrinka was knocked out in the second round at Queen’s by the big-serving South African Kevin Anderson, who won it in two tie-breaks. No sweat there. After seven rounds of matches on the Terre Battue, mental and physical rest take primacy. This year, that is helped by the championships starting a week later than normal.

The time will be spent with his coach Magnus Norman, a resolutely clay court player, working out tactics.

That’s another of Wawrinka’s strengths. He is ruthless.

“When Novak [has] doubts, we know that the forehand is a weakness or can be a weakness,” he said after Roland Garros. “I wanted to be in the match. He was on the baseline. I wanted him to play lots of balls. I wanted to put him on the wrong foot, and that was the key to the match. I had to hit the ball very early and had to step in. It made the difference.”

Failing better is winning more. He knows it.