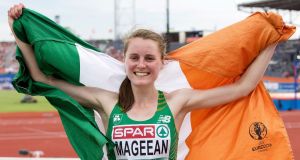 It was the last day of the European Athletics Championships, and it felt a little like Groundhog Day for Derval O’Rourke, Jerry Kiernan and I inside the RTÉ studios in Donnybrook.

We’d been arriving at Donnybrook for the past four days, one hour before broadcast, making sure we were all set and ready to go for the scheduled air time each day – the commentary coming live from Amsterdam.

On arrival, we’d have an informal meeting in the sports office, where we were handed the proposed schedule and programme for the show. We each had our own notes, which we’d align with each other, and the most up-to-date start lists for the day.

Next up was a visit to wardrobe where our choice of clothes were cleaned and ironed each day. Once dressed and shoes changed, we headed up for the make-up room. Even Jerry had to make the daily trip to make-up.

When you follow the same pattern for more than a few days in a row, things can start to get a bit casual. You know you will always get there on time and meet the deadline, then the seconds are counted down and the introductions are made by Peter Collins, and suddenly we’re live on air, ready to provide insight into the day’s competition . . . Here we go again.

Earlier in the day I was in studio with Jerry for the men’s and women’s half marathon and after a few hours rest, research and review of the final day’s action, we were all still anticipating a much-needed medal for Ireland.

It’s a strange thing but when something positive is about to happen, you get a good feeling, just know, without saying too much, that there’s a good chance of something special happening on the day.

We had five finalists and each with a different story and hope for the day. Michelle Finn, Sara Treacy and Kerry O’Flaherty were all in the women’s 3000m steeplechase, the first time ever to have three Irish athletes in a European Championship final, in any event.

The men’s 4 x 400m relay were hoping to run a time that would get them on the plane to the Rio Olympics. And then there was Ciara Mageean, in her first senior international final, with high hopes she would deliver a medal for Ireland in one of the last events on the final day.

It’s interesting to get the view from the other side, because when you are on the track competing, you have no idea of the talk and speculation that takes place at home. Both Derval and I had a little sympathy for Jerry as he was expected to comment on the expected performance of Ciara, one of the very athletes he also coaches.

The 1,500m is one of those races that once you are in the final, anything can happen. Particularly if it turns into a tactical race: the further the race goes on the shorter the actual race really is.

I could sense that this was turning into a race about who was the fastest over the final 400m. But you also have to take into account the obstacles that can appear in your way as the pace quickens; some athletes start to fade away and block the path of the athletes still full of running.

Ciara was never too far from the leaders, but she was always in a box on the inside lane, the shortest route maybe, but often difficult to break free when your path is blocked by slowing runners.

I was distracting myself by keeping an eye on the time for the last lap, Jerry and Derval were jumping up and down, shouting at the big screen. It was very exciting, and when I stopped the clock at 59 seconds, Ciara came across the line in third, a bronze medal for a girl that had shown such great potential as a junior, then persisted for so many years through injury and the battle to regain fitness and speed.

It’s not unusual for junior athletes to fall into a trough for a few years. I did it myself in 1987, after winning senior championships over cross country and 1,500m on the track. Then, when it looked like I might qualify for the 1988 Olympics in Seoul, it felt like my whole world was falling apart, when I was plagued by injury after injury.

It took a lot of patience, persistence, and trial and error before I was anywhere near returning to join the Irish team and finally deliver on that potential in 1992 with a fourth place finish over 3,000m at the Barcelona Olympics, a full five years later.

In some ways a lot of Ciara’s journey reminds me of my similar one, and also how the belief and confidence that I gained from realising I belonged on the world stage allowed me to compete at a much higher level. I was no longer afraid or worried that maybe I didn’t belong.

When an athlete arrives like that, makes themselves known all of a sudden, they gain a level of respect; but there’s also a level of expectation from themselves which allows them to deliver great results each time they race.

Still, every time a medal is delivered it makes also you wonder why it’s so difficult. We have the talent and the ability in this country, yet the deliverance of medals can be so rare.

It’s now 23 years since I first won a senior silver medal over 1,500m at the World Championships in Stuttgart. How can it have taken so long for a similar result in Amsterdam?

Ciara was one-year old at the time, hardly inspired by the sight of me running in Barcelona. By all accounts the athletes have far greater support and facilities now, and yet the one athlete who returns with a medal from the European Championships certainly hasn’t had a smooth path.

And perhaps more significantly, she is coached by a former athlete with very traditional training methods, and no fancy gadgets or gimmicks whatsoever.