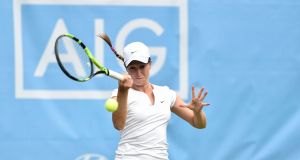 Ireland’s Sinéad Lohan plays a forehand during her final with Jodie Burrage of England at the AIG Irish Open at Fitzwilliam Lawn Tennis Club in Ranelagh, Dublin. Photograph: Matt Browne/Sportsfile

Ireland’s Sinéad Lohan fell just short of adding the AIG Irish Open title to the won she won in Portugal two weeks ago. The student, currently based in the US, lost in two sets to England’s Jody Burrage 7-6 (4), 6-4 at Fitzwilliam Lawn Tennis Club in Dublin.

Both players were carrying injuries into the final, Lohan a stomach problem that she has had for some weeks and Burrage a wrist injury she sustained when she fell on court earlier in the week.

To that backdrop, the match never really found a rhythm with service games being exchanged in both sets, the first running to a tiebreak, Lohan having served for the set at 6-5.

But Burrage, responding well to draw level 6-6, rallied to send it into a tiebreak.

Burrage then streaked to a 5-1 lead in the tiebreak before closing out the set.

The second stanza was also a rocky ride with service games given up by both players five times.

Lohan double-faulted in the seventh game for 3-4 with Burrage serving for 5-3. While Lohan held serve, the English girl showed no sign of the nerves of the opening games and served out the match for 6-4.