The defending champion saw off Azerenka in three sets 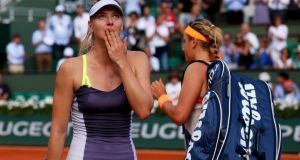 Maria Sharapova reached her second consecutive French Open final with a 6-1 2-6 6-4 victory over Victoria Azarenka in Paris. There she will meet Serena Williams who brushed aside Sara Errani in straight sets.

The defending champion benefited from a rain break at the end of the second set when the momentum seemed to be with her opponent.

It was a typically up and down day on serve for the Russian, who hit 12 aces and 11 double faults before clinching victory in two hours and 10 minutes.

Yesterday, Sharapova lost the first set against Jelena Jankovic to love in a flurry of unforced errors, and the omens were not good when two double faults handed the opening game to Azarenka.

But from there the Russian hardly put a foot wrong in the opening set, crashing winner after winner as she reeled off six games in a row, clinching the set with an ace.

Azarenka was the one spraying the ball, particularly off her forehand, but her fighting spirit rivals Sharapova’s and she dug in.

At the start of the second set it was still the Russian in control but a tight hold for 2-1 did Azarenka the world of good and she began to settle into the match.

The pair had played 12 times before, with Azarenka leading 7-5, but Sharapova had won both their previous matches on clay.

The second seed has not been entirely convincing this fortnight, though, and her level began to drop as her opponent’s rose.

Azarenka broke for 4-2 and then held serve before the weather intervened, play pausing as spectators pulled on coats and put up umbrellas.

The rain was only light and they carried on, but things did not get better for Sharapova, who stopped play because she thought Azarenka’s shot was out only for the umpire to decide it was in.

That brought up two set points and, after saving one with an ace, she then gave it away with a double fault.

At that point the rain became heavier and play was suspended for just over half an hour, much to the frustration of Azarenka.

When they returned, Sharapova had regained her composure and the surety of her ball striking, and she broke to lead 2-1 in the decider only for Azarenka to hit straight back thanks to four double faults.

But the Belarusian was always struggling to keep parity and three games in a row for Sharapova left her serving for the match.

Still there was life in Azarenka, though, as Sharapova struggled to find her first serve on four match points and found the ball fired straight back at her.

The Russian’s Achilles heel, double faults, came back to haunt her as two in a row gave Azarenka the break before she held to love.

But, with the pressure back on Sharapova as she served for it a second time, the 26-year-old made no mistake, clinching it, somewhat ironically, with an ace.

In the other semi-final Williams beat Italy’s Sara Errani 6-0, 6-1.