Sharapova fails to be put off after horror start 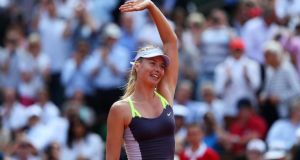 Maria Sharapova waves to the crowd as she celebrates match point in her quarter-final against Jelena Jankovic at the French Open in Paris. Photograph: Clive Brunskill/Getty Images

The two have known each other since their junior days at Nick Bolletieri’s academy in Florida and Sharapova had dominated their previous meetings.

But she failed to win a game in the first set today and needed to show all her fighting qualities to come through 0-6 6-4 6-3.

Sharapova had reached the last eight without dropping a set but Jankovic in the form she has shown this fortnight was a step up from any of her previous opponents.

The Serb was ranked number one in the world after reaching the US Open final in 2008 but has been sliding ever since and had not reached a Grand Slam quarter-final since making the last four here three years ago.

Jankovic has had a decent clay-court season, though, and served notice of her potential at Roland Garros with a third-round win over Sam Stosur. But not in her wildest dreams could she have imagined winning the first set today without dropping a game.

Jankovic played very well, hitting her shots with real zip and serving intelligently, but Sharapova was all over the place.

The second seed made 20 unforced errors in six games, finding the net and tramlines more often than the court and looking thoroughly flustered as the games ticked by.

It was only the fourth set at a Grand Slam that Sharapova had lost to love, and she knew she needed a quick response.

She got it in the opening game of the second set as Jankovic double-faulted to help Sharapova on to the scoreboard, and it proved to be the turning point.

She won four of the next five games but it was still a struggle and Jankovic pulled back to 5-4 before Sharapova finally clinched the set.

The Serb was not going away but Sharapova is one of the game’s great fighters and the decibel levels increased as she sought the final-set breakthrough.

It came in the seventh game of the set, and two games later Sharapova threw her arms in the air as a Jankovic forehand drifted wide.

In the semi-finals Sharapova will meet third seed Victoria Azarenka, who has now made the last four at every Grand Slam after defeating 12th seed Maria Kirilenko 7-6 (7/3) 6-2.