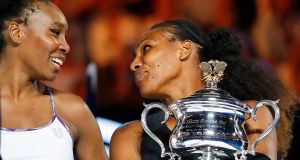 Serena Williams (R) of the USA holds her trophy after defeating her sister Venus Williams (L) in their women’s Singles final match at the Australian Open Grand Slam tennis tournament. Photograph: Made Nagi/EPA

Serena Williams was utterly unaware that a victory Saturday night would put her back at world No. 1. Her coach Patrick Mouratoglou did all he could to keep her in the dark. But there was no hiding the other statistical stakes as Williams walked back into Rod Laver Arena, headphones around her neck and game-face in place, to play her older sister Venus Williams in the Australian Open final.

The tennis circuit can be an echo chamber where the same questions and themes reverberate from week to week as the locations change but the protagonists do not. So even if Serena Williams refused to entertain questions during the tournament about the possibility of winning her 23rd Grand Slam singles title and breaking her tie for the Open-era record with Steffi Graf, there was no dodging that number in her own head.

Now, after her 6-4, 6-4 victory over her sister, she can celebrate No. 23 instead of fret over it. “I’ve been chasing it for a really long time,” Serena Williams said. “When it got on my radar, I knew I had an opportunity to get there, and I’m here. It’s a great feeling. No better place to do it than Melbourne.”

She and her sister made their first visit to Melbourne in 1998. They were teenagers with braces on their teeth and braids in their hair and a clear sense that they were special, but no idea of just how far their talents and confidence would carry them.

Serena now has 23 major singles titles to her sister’s seven, and has won seven of their nine Grand Slam finals and eight of their last nine matches. Those figures brook no argument. Williams 2.0 has the better operating system when it comes to locating the lines and creating the angles under the greatest pressure. She also has the purer service motion.

But Williams 1.0 certainly gave it her all Saturday night, throwing herself into the groundstrokes and displaying more emotion when a return struck the net or a rally failed than she has perhaps ever shown in a major final. “It was palpable how much Venus wanted it,” said Isha Price, the Williamses’ half sister.

An all-Williams final is always an emotionally complex affair, which is all the more reason to admire how the older sister has so often handled the disappointments.

“That’s my little sister, guys,” Venus said, pointing at Serena during the post-match ceremony. She then spoke to her sister directly. It was quite a riff.

“Congratulations Serena on No. 23,” Venus Williams said. “I have been there right with you. Some of them I lost right there against you. I guess that’s weird, but it’s been an awesome thing. Your win has always been my win. I think you know that. And all the time I couldn’t be there, wouldn’t be there, didn’t get there, you were there. I’m enormously proud of you. You mean the world to me.”

Serena is now within one victory of Margaret Court’s career record of 24 Grand Slam singles titles. “Good on her if she’s good enough to do it,” Court said during the week in Melbourne.

Serena has closed in on Court with an unprecedented run of success at an age when most great women’s tennis players of the past had already retired. Graf, for example, was done by 30. But Serena has now won 10 major singles title since turning 30. New York Times Service

1 Ken Early: Despite coronavirus, Premier League season must be finished if at all possible
2 ‘Magnificent’ Conor Connelly remembered after sudden death
3 Favourite sporting moment? It’s a bit like choosing your favourite child . . .
4 Harry Kane: I won’t stay at Tottenham 'for the sake of it’
5 Summer tours next in line for postponement as rugby assesses options
Real news has value SUBSCRIBE

New Zealand Rugby forced to cancel lower tier competitions 07:20
Harry Kane: I won’t stay at Tottenham 'for the sake of it’ 07:13
Competitive instinct will ensure sport returns as it always was 06:30
Ken Early: Despite coronavirus, Premier League season must be finished if at all possible 06:00
Summer tours next in line for postponement as rugby assesses options 05:00
Here is your handy guide to sport on television this week