Sarah Greene and her UCD colleagues going from strength to strength 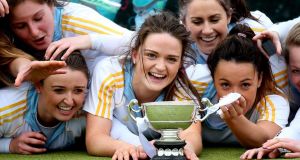 
In light of the season the UCD women’s hockey team has enjoyed, you could have picked just about any month since they began their campaign last September to mark their form and achievements – not least the spell since February when they won their third successive Leinster Division One title, their second Irish Senior Cup in three years, and, last weekend, their first ever Irish Hockey League.

The trophy cabinet at Belfield is heaving.

Under the guidance of coach Jonathan Harte, the students have been peerless, their only ‘blip’ of note in January when they suffered their sole league defeat of the season – but that was on a day when they were without six internationals, away on duty with Ireland, and four other unavailable first team players.

Other than that, though, their record has been superb. They beat Corinthian, Ards, Old Alexandra, Railway Union and Pembroke Wanderers en route to their Irish Senior Cup success. They only won the competition for the first time in 2009, now they’ve done it three times.

But the Holy Grail was a title they had never won before, the Irish Hockey League, formerly known as the All-Ireland Club Championships. They made light work of their pool, beating Hermes, Catholic Institute, Greenfields and Lurgan – scoring 17, conceding one – before drawing with the team they went on to beat on penalties in the final, Railway.

Railway were seeking an IHL three-in-a-row, but after a 1-1 draw in last Sunday’s final at Banbridge, UCD goalkeeper Tiffany Ellis played a part in keeping out four of their five ‘one on one’ penalties. Internationals Nikki Evans and Anna O’Flanagan, with close to 40 goals between them this season, converted their efforts to complete UCD’s trophy haul and make them All-Ireland champions for the first time.

Sarah Greene, then, raised the treasured trophy for her team, and as captain of this hugely gifted and successful young side, she is our sportswoman of the month.

The award wouldn’t look out of place on the mantelpiece of any one of their starting line-up from last weekend – Ellis, Leah Ewart, Evans, Katie Mullan, Niamh Atcheler, O’Flanagan, Jeamie Deacon, Emily Beatty, Sarah Robinson and Gillian Pinder – nor indeed the substitutes’ bench – Orla Macken, Caroline Hill, Kate Collins-Smyth, Sam Willis, Elaine Carey, Natasha Cook and Deirdre Duke. But Greene is our choice for her captaincy of this all-conquering team.