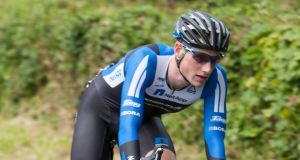 Sam Bennett may have been forced to withdraw from his first Tour de France this week but team manager Ralph Denk made clear on Thursday that he still believes the Irishman has a big future ahead.

Bennett was riding the Tour for the first time but didn’t complete Wednesday’s stage 17. He got into difficulty early on and climbed into a Bora-Argon 18 team car prior to the finish, thus ending his Tour.

“We had a nice conversation with him and the reason was he was totally empty,” said Denk, asked about the end of Bennett’s Tour. “He is not sick, he is not ill, he is empty. I think it is a good point he leaves. Otherwise when he stays in the race, I think it is counterproductive for his development.”

Cavendish withdrew during stage eight of the 2007 edition while Kittel did not start stage five in 2012.

“We know what he has a big engine and we know that compared to other sprinters he is also a good climber,” he continued. “That gives me trust in him for the next years. I think he has the talent for sure to finish a Grand Tour and also sprint for a podium in the next years.”

Bennett turned professional with the team prior to the 2014 season and clocked up three UCI-ranked wins. He has done likewise again this season. Speaking on Wednesday, Bennett explained how run down he had felt on the race’s second rest day.

“It is really disappointing. I want to push each day to try and become stronger. I know the more days I can do the better I will be for it. But there also comes a point where if you push too much over the limit you are going to be wrecked for the rest of the season. That is not good for the team either.”