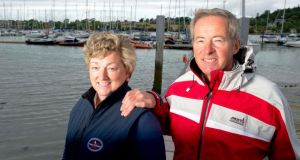 The death has been announced of the yachtsman Joe English (58), the former skipper of Ireland’s first entry in the Whitbread Round the World Race in his native Cork, earlier today.

He was diagnosed with early onset Alzheimers almost ten years ago that ended his career as a professional sailor.

English became the skipper of NCB Ireland in July 1989, barely two months before the start of the race that was to capture the attention of the entire country.

National expectations for success ran high but stage wins were eclipsed by other teams, notably the Peter Blake led Steinlager II entry that dominated the race. However, in a race noted for risk of loss of life and boat, the first Irish campaign defeated the moniker of ‘Never Coming Back’.

Additionally, many members of the team received a start or a boost to their careers while achieving a full circuit of the world. For the team’s skipper, a childhood ambition was also realised.

His interest is boats and sailing began at an early age with his older brother Eddie who also became a successful international sailor.

Their love of the sea was fostered by their parents Eamonn and Mary, both of whom were past commodores of Cove Sailing Club in their hometown of Cobh and this interest also extended to their younger siblings Denis and Jean Paul.

As a child, he was an avid reader and inspired by Joshua Slocum’s narrative “Sailing Alone Around the World”, an account of the first solo circumnavigation in 1898 on the 39-foot sloop “Spray”. Joe’s first adventure, to Spike Island with Eddie on a small clinker built dinghy at age nine would eventually lead to a similar life experience to his hero Slocum.

Both brothers were amongst the first recruits to the new Irish Yachting Association Junior training programme and Joe competed in Cadet and National 18 dinghies as well as the traditional Cork Harbour One-designs. He won the IYA Junior Helmsman championship with his lifelong friend Neil Kenefick in 1974 and he first represented Ireland at the Youth World Sailing Championships in Largs, Scotland the following year.

He first competed in the Admiral’s Cup in 1977 on ‘Big Apple’ owned by Clayton Love, Hugh Coveney and Raymond Fielding leading up to the notorious 1979 Fastnet Race with Denis Doyle on the Ron Holland designed Swan 441 Moonduster, the forerunner to Doyle’s more famous varnished boat of the same name.

Later that year, he travelled to Australia where he was based in Sydney and competed in various major events including the Southern Cross and Kenwood Cup series in Hawaii. Returning to Cork in 1980, he won the One Ton Cup sailing with Harold Cudmore on ‘Justine’ winning all five races in a light airs series and followed this with victory in the two-ton cup in Sardinia a year later.

Following the death of his father in 1980, Joe met April Murphy and the couple returned to Australia where he was hired by James Hardy, the backer of the South Australia campaign and competed for the America’s Cup in 1983 that was won for the United States by Dennis Conner.

Joe and April later bought a house in Fremantle where they lived for several years after the cup and married in 1987.

That same year, a group of Irish sailors and business figures formed the Sail Ireland syndicate to enter the 1989/90 Whitbread Round the World Race. The 82-foot yacht was designed by Ron Holland and built in a warehouse in Dublin’s Ballyfermot. Named NCB Ireland, it was launched in November 1988 and Joe was appointed skipper in July 1989.

After a farewell ceremony in Dun Laoghaire in August attended by thousands of well-wishers, Joe quietly left the boat shortly after it departed for Southampton to be with April for the birth of Aoife, their first child.

NCB Ireland became a national interest and her crew of 23 competed with distinction in the 33,000-mile course and faced several technical difficulties before safely completing the race after nine months around the world.

In 1992, twin sons Robbie and Conor were born and like their sister, they continued the family passion for sailing throughout their childhood and into adult life.

He competed in the 1993-94 edition of the Whitbread in the new 60-foot class with New Zealander Chris Dickson on ‘Tokio’ and subsequently became an advisor to the race management team as it evolved into a fully professional event.

In 1994, with friends from the Royal Cork Yacht Club in Crosshaven, he led the development of one of the world’s first sportsboat classes aimed at delivering affordable and fun racing for club level sailors.

Designed by Tony Castro and built by O’Sullivan Marine in Tralee, the ‘1720 Sportsboat’ was well received and 115 boats were built. The fleet experienced a resurgence of interest in Ireland in recent times and is actively used in competitive events and training around the coast today.

From 2004 at age 48, a series of tests led to a diagnosis of early onset Alzheimers Disease and he left his position with McWilliam sailmakers. Determined to fight the disease, he was open about his condition and participated in a RTE Primetime documentary in collaboration with the Alzheimers Society about the lives of sufferers and their families in Ireland.

After years of dedicated care by April and his children, Joe English passed away peacefully at St Finbarrs Hospital, Douglas Road this afternoon.

Joe English is survived by his wife April, daughter Aoife, sons Robbie and Conor, brother Eddie, Denis and Jean-Paul and wide circle of friends and sailing mates in Ireland and around the world.