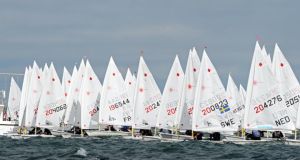 Competitors jockey for position at the start of the Laser European and World Sailing Championships at Dún Laoghaire during the summer. Such international events are no barometer of the national scene. Eric Luke/ The Irish Times

Ironically, this review comes after a period where Irish sailing sought to punch above its weight, playing host to all sorts of European and world championships this year and last, all of which relied heavily on a mix of State and commercial support.

The Irish Sports Council spent €1.25 million on sailing last year, including €400,000 on a fleet of dinghies and new support vehicles for the ISA. It was a support that prompted the ISA chief executive Harry Hermon to declare 2012 as a “breakthrough year” for Irish sailing. But it appears such international events are no barometer of the national scene. In fact, they come at a time when many Irish clubs are facing financial headwinds with unsustainable overheads.

According to the ISA larger clubs have lost 30 per cent of their members over the last five years, resulting in a combined drop in ISA club memberships of 24 per cent.

If sailing starts to depend on funding that can be whipped away at the stroke of a pen – the 8 per cent cut in sports grants in the Budget being just one example – then it’s heading for troubled waters.

Consequence
One consequence of this is ISA membership itself, which peaked at about 25,000 in 1995 but has dipped beneath 20,000, even after including broader interests such as power-boating.

Participation in water sports is also low because a lack of facilities, or expensive ones in private hands prevent residents and tourists alike from enjoying a coastline that is arguably our greatest natural asset. While there are plenty of good news stories, the cost of access to the water – especially in Dublin – remains the elephant in the room.

Local clubs are the basic building blocks of the Irish sailing scene, not least because they provide access to the water, so without them the sport can’t grow. Without new blood, the whole scene could nose dive, not helped by lack of money among 30-to-50 year olds for their children’s participation in the sport and transition to adult classes.

A new blueprint for Irish sailing is required, a plan that rights what some fear is a listing ship. In appointing an independent review group, the ISA has taken an important first step.