Russian ‘withdraws’ due to injuries sustained in Michael Conlan bout 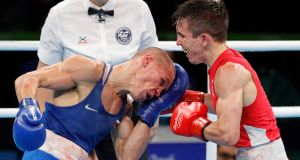 The Russian boxer who controversially knocked Michael Conlan out of the Olympics on Tuesday has reportedly been left unable to compete in his semi-final due to injury.

Vladimir Nikitin was awarded a unanimous victory over the Irish boxer in their quarter-final bantamweight bout - but according to unconfirmed reports on Wednesday night he will be unable to take his place in the last four of the competition. Such were the injuries he sustained at the hands of Conlan.

Nikitin was at the receiving end of a lot of punishment over the three rounds against Conlan - who after the defeat told the media that the AIBA are “rotten to the core”, accusing them of fixing the fight.

Nikitin can't advance through to next round because of injury - @AIBA_Boxing should stick the winner @mickconlan11 back in!

Guy who Mick battered has had to withdraw because of the beating he took, this just gets worse! @AIBA_Boxing

The Russian, who is still guaranteed a bronze medal, is to fight Shakur Stevenson of the USA next.

Under AIBA rules a fighter does not need to officially pull out of a fight until the morning weigh-in.

But according to his opponent’s coach - Billy Walsh - he has already revealed that he will not take his place in the semi-final.

Nikitin’s withdrawal would not change anything for Conlan though - instead of triggering his return to the competition Stevenson would receive a free pass to the final. And with that a gold or silver medal.

Earlier on Wednesday the AIBA revealed that a number of judges have been removed due to ‘a handful of’ controversial decisions at the Rio Olympic Games so far. The judges involved in Conlan’s defeat to Nitikin however are not involved.