Rockabill VI to start as favourite for IRCA championships 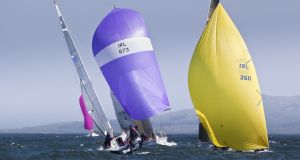 A total of eight Irish titles will be decided by the expected 80-boat fleet competing at the ICRA National Championships 2016 at Howth Yacht Club. Photograph: David Branigan/Oceansport.

Light airs look set to dominate at least the opening day of the annual Irish Cruiser Racing Association annual championships at Howth Yacht Club. The fleet has risen to 85 boats this week with representation from all coasts and about two dozen clubs including Welsh and Scottish entries.

In contrast to recent times past, the emphasis has switched from the largest boats of Class Zero where six crews will compete for their national title to Classes One, Two and Three where the bulk of the entries are.

The “ICRA’s” will be the first major outing for Paul O’Higgins on his 36-footer Rockabill VI, a brand new JPK1080 design that is on paper at least the boat to beat. A former national champion in a previous Rockabill, O’Higgins and his crew can expected plenty of challenges from 20 other boats in the class.

Notables include a selection of J109’s including John and Brian Halls’s Something Else from the National YC, recent winners of the Scottish Series and Tim Goodbody of the Royal Irish YC on White Mischief.

Absent from the championship this year due to crew unavailability is Ian Nagle’s Jelly Baby from the Royal Cork YC that always provides a strong challenge so front-runner for the class will be the defending champion John Maybury on Joker 2.

And still the depth in the class continues with other potential winners such as Rob McConnell’s Fool’s Gold from Waterford Harbour Sailing Club and Pat Kelly’s Storm from Rush. And still the list goes on.

If local knowledge is to be any advantage over the three-day series then it is certain to be available in abundance in Class Two where Howth boats account for all but two of the 16 entries.

Ross McDonald’s Equinox is the defending champion here from 2015 that combined with the biennial Sovereigns’ Cup at Kinsale of which he was the overall winner as well.

Howth’s Under 25 Keelboat Boat will be defending their Class Three title in the final season for the original crew-members in their J24 Ireland’s Eye Kilcullen. They can only still be considered favourites to retain their title, this time on home waters.

After the opening day was cancelled for all but the windsurfers due to no wind, thick mist and light winds just about relented to get an extra race sailed to compensate for the lost races.

The women’s 49erFX skiff event saw Andrea Brewster and Saskia Tidey struggle to find form in the conditions and were 14th out of 15 boats overall.

And in Laser Radial, Annalise Murphy was being led by her unsuccessful challenger for the Rio 2016 place as Howth’s Aoife Hopkins continued with her preparations to challenge for Tokyo 2020.