Russian Stanislav Emelyanov banned due to irregularities in biological passport 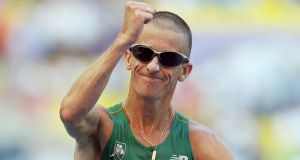 Once again it’s a case of better late than never as Rob Heffernan becomes the latest Irish athlete in line for a major championship medal due to the retrospective banning of a Russian athlete for a doping offence.

Heffernan will now be promoted to the bronze medal position in the 20km walk from the 2010 European Championships in Barcelona. Heffernan finished fourth on the day, but the IAAF – the governing body of world athletics – has now confirmed Russian race walker Stanislav Emelyanov, who won the gold medal, has been banned due to irregularities in his biological passport.

This dates back to July 26th 2010, the day before Emelyanov won the gold medal in Barcelona, which means all his results from that year on will be annulled. He has also been handed a two-ban.

Heffernan has always questioned the legitimacy of certain Russian race walkers, and for good reason: Emelyanov is now the 17th Russian race walker to be banned in recent months, almost all of which worked under the same coach, Viktor Chegin.

Unofficially being told that I am going to receive the BRONZE medal for Euro Champs 2010 20km after Russian has been done for drugs.

Another Russian, Sergey Kirdyapkin, won the 50km walk Olympic gold medal in London 2012, where Heffernan also finished fourth. Kirdyapkin’s name hasn’t yet appeared on the banned list, although he was a sudden withdrawal before the World Championships in Moscow last summer, where Heffernan won the gold medal.

Now, although it may take a while to cut through some red tape, Heffernan will have a European bronze medal to go with his world championship gold. He also intends on adding another medal, over the 50km walk, when the 2014 European Championships get underway in Zurich next month.

Heffernan also becomes the third Irish athlete to benefit from a retrospective banning of an athlete for a doping offence in the last year, due to the increased range of liability under the biological passport.

Alminova won the 1,500 metres at the European Indoors in Turin back in 2009, with McGettigan finished a close fourth. Alminova was stripped of all performances from February 2009, as well as being handed a 30-month suspension, due to irregularities in her biological passport.

Derval O’Rourke is also due a bronze medal from the 60 metre hurdles at last year’s European Indoors in Gothenburg, after gold medal winner Nevin Yanit from Turkey was also later handed a two-year ban.

For Heffernan, who also finished fourth at the 50km walk at those 2010 European Championships, that belated bronze medal might well be silver, given the man who won that medal on the day, Italy’s Alex Schwazer, was also banned in 2012, although not retrospectively.

4 Mourinho claims Gareth Bale is ‘better than ever’