Investigation into comments made about homosexuality on Victoria Derbyshire programme 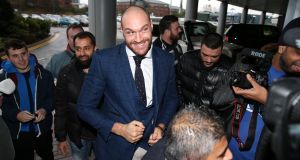 Greater Manchester Police have launched a hate crime investigation into comments made by Tyson Fury. Photograph

Police have launched a hate crime investigation following comments about homosexuality made by the world heavyweight champion boxer, Tyson Fury.

Greater Manchester Police (GMP) said that the force had received a report of hate crime following comments made about homosexuality on the BBC’s Victoria Derbyshire programme.

“We can confirm that at 10.30am this morning we received a report of a hate crime follow comments made about homosexuality on the Victoria Derbyshire programme,” said a GMP spokesperson. “As with all hate crime we are taking it extremely seriously and will be attending the victim’s address to take a statement in due course.”

Fury didn’t appear on the Victoria Derbyshire programme, but his uncle and trainer, Peter Fury, gave an interview in which he suggested that the boxer needed to apologise for linking homosexuality to paedophilia.

Fury, the world heavyweight champion who defeated Wladimir Klitschko in Germany last month, is one of 12 contenders for the award but his place on the shortlist has been a matter of significant controversy following homophobic and sexist remarks made by the fighter. By Tuesday evening more than 100,000 people had signed a petition arguing Fury should be removed from the shortlist, set up by the LGBT campaigner Scott Cuthbertson.

The BBC director general, Tony Hall, is expected to be questioned about Fury’s nomination for Sports Personality of the Year by the culture, media and sport select committee next Wednesday.

Lord Hall is due to attend the select committee to discuss the BBC’s charter renewal, although his appearance has yet to be formally announced, but he is also set to face questions regarding the corporation’s decision not to remove Fury from the running.

The 27-year-old has defended comments made about the Olympic heptathlon champion, Jessica Ennis-Hill, when he said she “looks good in a dress” and “slaps up good”, adding that “a woman’s best place is in the kitchen and on her back”. He also appeared to compare homosexuality to paedophilia.

John Nicolson – the SNP MP, member of the culture, media and sport select committee and a former BBC presenter – has written an open letter to Hall urging the corporation’s director-general to drop Fury from the shortlist.

He wrote: “By nominating Mr Fury, the BBC endorses his view that he’s a role model. Moreover it would, subsequently, be difficult for the corporation to defend itself against the accusation that it is half-hearted in its opposition to homophobia. I find it inconceivable that the BBC would allow his candidacy to proceed had he expressed racist, Islamophobic, or antisemitic views in such terms.

“All across the country young people – both gay and straight – will watch the awards. Mr Fury’s name going forward will send out the clearest of signals – namely that extreme bigotry is not a disqualification for one of our country’s highest sporting honours. That cannot be right.”

Fury, who was stripped of his IBF title on Tuesday night after signing up for a rematch with Klitschko, tweeted last week: “Hopefully I don’t win @BBCSPOTY as I’m not the best roll model [SIC]in the world for the kids, give it to someone who would appreciate it”, but the BBC has no plans to remove him from the shortlist or make any special arrangements to avoid potential controversy in Belfast on 20 December.

The corporation insists that the nominations for Spoty were made by an independent panel whose members included Baroness Tanni Grey-Thompson, Baroness Sue Campbell, Jermaine Jenas and representatives from the national media. Fury and Andy Murray were added to the shortlist after the panel had initially convened, following the boxer’s victory over Klitschko and Great Britain’s success in the Davis Cup, but every member was consulted.

The corporation says the panel of industry experts examine each contender’s sporting achievements and that the BBC does not endorse the nominees’ personal beliefs. One aspect of the judging criteria is listed as taking “into account ‘impact’ over and beyond the sport or sporting achievement in question”.

The BBC apologised on Tuesday after the presenter Clive Myrie described Fury as a “dickhead” during a live TV newspaper review on Monday night. Myrie looked at his watch, decided it was after the watershed and said: “You cannot be a dickhead and win the Sports Personality of the Year”. A BBC spokeswoman said: “We apologise to any viewers who were offended by the language Clive Myrie used during a discussion on the late-night paper review on the News channel.”

1 St Michael’s conveyor belt showing no signs of slowing down
2 Shane Lowry agreeing to play in Saudi Arabia is an unfortunate choice
3 Ashleigh Barty now living up to all her earlier promise
4 Gerry Thornley: Saracens very late to apologise for repeated cheating
5 Conor McGregor: Putin ‘one of the greatest leaders of our time’
Real news has value SUBSCRIBE