Phil Simmons calling for a big improvement in Ireland’s bowling 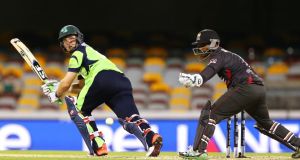 One win may be enough over the remaining four Pool B games, but with run rate possibly deciding matters, two wins from the games against South Africa, Zimbabwe, India and Pakistan is the more likely target.

Ireland coach Phil Simmons admitted work needs to be done on Ireland’s bowling in the second half of the innings after the UAE added 147 runs in the final 15 overs at The Gabba, following on from the West Indies hitting 167 over their last 15 in the opener.

Next up for Ireland is a clash against South Africa in the tight surrounds of the Manuka Oval next Tuesday (3.30am Irish time), with the presence of the world’s top two one-day batsmen AB de Villiers and Hashim Amla concentrating minds.

Simmons is likely to have to deal with questions over his possible appointment as the next West Indies manager after Cricket Ireland chief executive Warren Deutrom confirmed that a request from the West Indies Cricket Board to interview Simmons in January was granted.

A former West Indies all-rounder, the 51-year-old from Trinidad has long stated that the job would be the only one he would leave Ireland for.

Deutrom also confirmed that Simmons has told the players he is a candidate to take over the position vacated by the sacking of Ottis Gibson last August.

Simmons, who took over from Adrian Birrell following the 2007 World Cup in the Caribbean, is contracted with Cricket Ireland up until December of this year.