Paula Radcliffe hits out at proposal to reset world records

Radcliffe: ‘I feel innocent athletes have suffered enough at the hands of drugs cheats’ 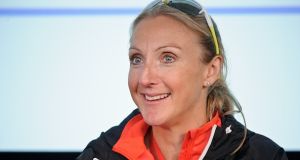 Paula Radcliffe has hit out at a UK Athletics proposal to reset world record due to doping. Photograph: Getty

Paula Radcliffe has hit out at a proposal to expunge all track and field world records from the books because she believes innocent athletes like herself will unfairly suffer.

Radcliffe was responding to UK Athletics’ report A Manifesto for Clean Athletics, which made 14 proposals to clean up the sport, including life bans for drugs cheats as well as resetting world records because many were set when doping was more prevalent. The 42-year-old, whose world marathon record of 2hr 15min 25sec has stood since 2003, said: “Without doubt you are going to punish innocent athletes, so why do it again when they have already had to compete against cheats during their career? I feel innocent athletes have suffered enough at the hands of drugs cheats.”

Radcliffe, one of three British outdoor and indoor world record holders along with Colin Jackson and Jonathan Edwards, added: “I’ll never agree with the records being wiped because I know 100% that at least one of those records was achieved clean and that means more were too.”

She believes a better and fairer idea is for all confirmed dopers to lose their previous records. “If sufficient evidence comes to light about doping at any point, then all of an athlete’s marks should retrospectively get wiped for their entire career,” she said. “It means, for example, that with Linford Christie all his marks would be gone because he failed a test in 1999. You are not saying they were cheating at that point but the decision to dope means you forgo and sacrifice everything you achieved before that. I think that is a strong deterrent.”

Radcliffe believes such a rule change, coupled with longer bans and criminalisation, would make a difference. “I think it is better to go down the route of where there’s suspicions trying to prove it,” she added. “And if it can be done, then let’s take the records away.”

The chairman of UK Athletics, Ed Warner, said he welcomed Radcliffe’s criticisms. “I am delighted she disagrees strongly, because what we are trying to do is provoke debate and take a cattle prod to the IAAF to find ways to create a better sport,” he said. “I could have taken a xenophobic, parochial view and said: ‘We’ve got three world record holders who are British, I better not say this’ but the sport needs people to believe it

Warner also said he discussed his idea with Sebastian Coe, the president of the IAAF. “Seb told me: ‘I have always been for striking out those records that are clearly wrong,’” he added.

Meanwhile Radcliffe says she strongly disagrees with the media portrayal of the Russian marathon runner Liliya Shobukhova andher agent Andrey Baranov as heroes after they went to the IAAF ethics commission to expose senior Russian Athletics and IAAF officials for extorting her of €450,000.

“You guys are calling her a victim, that makes my blood boil every day,” she said. “She’s not a heroic whistleblower. It makes me angry. She didn’t do the right thing.

“She should have been banned for life, not rewarded by the World Anti-Doping Agency with a reduction in her ban,” she added. “And her agent Andrey Baranov should be out for life too. having had 28 athletes that he manages banned. He should not allowed to be anywhere near the sport.”

Radcliffe was more complimentary about Vitaliy Stepanov, a former employee of the Russian Anti-Doping Agency Rusada, who also blew the whistle on the scale of the cheating in his country. But said she couldn’t completely forgive his wife and fellow whistleblower Yuliya, a former 800m runner, for doping during her career.

“Vitaliy I get – he was a whistleblower and he was very brave,” she said. “But Yuliya was a cheat who was caught and tried to make it better. And yes, there’s some credibility regained coming forward the way that she did and giving the information that she did. But she was still a cheat.”

Radcliffe, who was emphatically cleared by the IAAF in November after it emerged that she had “plausible explanations” for three allegedly suspicious blood values during her career, admitted that the sport was in a tricky situation. But she urged everyone in the sport to come together to fix it.

“It is in a tricky situation, especially when Seb Coe has recently been attacked from all fronts, day in and day out,” she said. “What I would like to see is people who care for the sport really coming together to clear up this mess. And to make the IAAF a much more answerable and properly structured federation that leads properly and that protects the clean athletes.

Radcliffe, who is on the IAAF’s cross-country committee and athletes commission, says she hopes to get further involved in a new era to push sport forward. “It is a sport that I love,” she said. “And it is a great sport. I want to do something about improving its credibility - and to work to ensure a better future for all the athletes there. It is not going to be an overnight task. But rather than all of us trying to pick and pull down our sport we need to proactively do something.”