Paddy Barnes determined to bring home a gold, come what may

Eight Irish boxers will compete in the Rio Summer Olympic Games. For those who will be tuning in, here is what you should know about the rules and scoring. 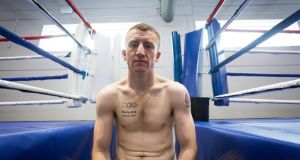 Paddy Barnes: ‘As it gets closer to the fight, I just lie there in the dark. I’m not in a good way. The team know to leave me alone.’ Photograph: INPHO/Gary Carr 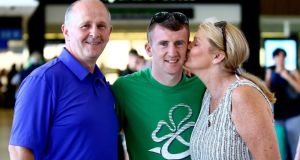 Paddy Barnes with his parents at Dublin Airport as Team Ireland departs for Rio on July 19th. Photograph: INPHO/James Crombie 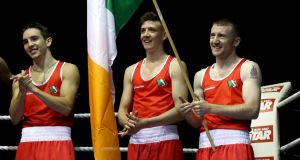 Paddy Barnes with the Ireland flag at the Elite International Ireland vs Russia on July 1st. Photograph: INPHO/Ryan Byrne

Paddy Barnes will have billions of eyes on him this coming Friday. The Belfast-born boxer has been given the honour of carrying the Irish flag into the Maracanã Stadium in Rio de Janeiro on his third and probably last Olympic Games.

As Barnes (29) prepared for the Games, making his lonely train journeys from his home in Belfast to his training camp in Dublin, he pictured the cheering crowds, flash photography and billion TV viewers. Those images helped brighten painful sessions for the little man with the incessant fighting heart.

Barnes fights at light-flyweight, meaning he has to compete at a maximum of 48 kilograms (105.8 pounds). Outside of the competition, his normal weight is 58kg (127.8 pounds) while he is in training and eating healthily.

Lacing up a pair of boxing gloves and fighting in a ring is often the easy part for a man who grimaces when he describes the horrors his body goes through to shed the excess 10kg.

“It’s just not pleasant,” he says. “I would go so far as saying at times it’s torture. You survive on the wits of sports scientists and dieticians and the plan they give you. When it comes nearer to the day of the weight, I genuinely can’t speak, I could walk past my best friend and not say a word. I’m not me then.

“As it gets closer to the fight, I just lie there in the dark. I’m not in a good way. The team know to leave me alone during those times.”

Rio will be the third Olympics for Barnes after bronze medals in Beijing and London. He is expected to win gold this time and cannot process or contemplate failure.

For Barnes, standing with a gold medal around his neck wasn’t a childhood dream: it was simply unlikely. He began boxing with his cousins as a teenager in the Co Down coastal town of Ardglass, and promptly lost his first 15 fights. He stuck with it because he was too stubborn to stop, a mindset that continues to help him.

“When I started boxing with all my cousins,” he says, “I was by far the worst out of all of them. So winning an Olympic gold wasn’t on the agenda. My biggest dream then was just to be decent at boxing.”

He receives modest funding from the Irish Sports Council and is grateful for it, but he has found it impossible to gain sponsorship for the Olympics – despite being a favourite for the gold medal in his weight class.

“I have a young family, and you do everything you can to support them. I have written to every company you can imagine. We are talking hundreds upon hundreds, but you get no response, I just don’t understand it.”

Carl Frampton, the featherweight world champion, remains a close friend. They met when boxing against each other as children, but have developed a strong bond outside of the ropes. In February, Barnes was ringside in Manchester to see Frampton beat Scott Quigg in front of 20,000 fans.

Does he ever question his Olympic dream and wonder if he should have joined his friend on big bills in the pro game?

“I am very close to Carl, and it makes me proud to see him do well for himself,” Barnes says. “But we are on different journeys in boxing. I need to win this gold medal. It just means so much to me. Is it tempting to turn pro? I don’t think about it, honestly, for now my only focus can be Rio.”

When preparing for a fight, Barnes visualises the crowds, not only in Brazil, but also at home in Northern Ireland. His favourite picture is one of crowds gathering outside a big screen at Belfast City Hall to watch his semi-final in the 2012 Games.

“I love the fact that, when I am fighting, boxing has the ability to unite people at home,” he says. “It’s always had that unique power to bring people together, and I love it for that.”

“I sacrificed a huge amount to get to the Olympics, and there are thousands like me,” he says. “It means something. I just wish they would stop using the Zika virus as an excuse.

“Golf is a game driven by money. They get ranking points for money, so what good is an Olympic medal to them? I’d have more respect if the golfers were actually honest about why they’re dropping out.”

Barnes put himself through weeks of exhausting sparring sessions in Dublin. Still, trying to replicate what he will feel in Rio is futile – his mind will have other ideas.

“ It’s hard to explain. It’s not fear at all; I have no fear of getting hurt. It’s the terror in your mind of getting beaten, when you’ve worked so hard for something for so long.” Guardian Service