Organisers run out of time to stage 2019 Rás Tailteann 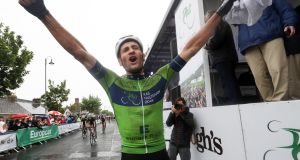 Luuc Bugter celebrates his victory in the race in 2018. Photograph: Bryan Keane/Inpho

It’s been on the UCI international calendar since 2000 but, following a long search for new backing, the organisers of the Rás Tailteann have been forced to abandon plans to run a world-ranked race in 2019.

Race director Eimear Dignam and her crew have been searching for a new backer since previous sponsors An Post stepped back after the 2017 edition. The race ran as usual last year thanks to a reserve fund, but the depletion of that source meant that a new sponsor had to be found for this May’s event.

Dignam explored various possibilities in that search, and was speaking to two companies in particular in recent months. One, a US-based company, told her several weeks ago that it was unable to commit for 2019. The second was an Irish company and while she hasn’t received a firm answer either way, she felt that time had ran out.

“We have exhausted all opportunities in relation to sponsorship for a UCI race this year,” Dignam said on Thursday. “I am extremely disappointed. I have been involved in the race my whole life. But I am satisfied that I explored every opportunity available to us to secure a sponsorship. We never envisaged that it would come to an end like this, but hopefully it won’t be an end.

“The 2019 international event will be put on hold with the hopes of coming back stronger in 2020.”

In recent weeks talks had ramped up with the Irish company and Dignam hoped for a commitment before this point in time. But with last year’s winner Luuc Bugter, a host of international teams plus the Irish domestic riders and county squads all seeking confirmation the race would take place in May, she was forced to make a tough decision.

“We didn’t get a no from the Irish company, but the timeframe for 2019 is too tight,” Dignam told the Irish Times. “We don’t want to give people false hope either. We are open to continuing to talk to that company.

“We will continue in the first part of this year to secure a sponsor for the 2020 edition. We haven’t given up hope that the Rás will re-enter the UCI calendar in 2020.”

The race has been run annually since beginning as a two-day event in 1953. It had grown in length and stature since then and became part of the UCI’s international calendar in 2000. This brought additional prestige and a higher standard of rider, but also ramped up the costs and increased the need for big sponsors.

Research by backers such as An Post showed a strong return, with brand awareness increasing greatly as a result of being involved in the Rás Tailteann and cycling itself. Still, that hasn’t yet led to a replacement.

Dignam’s announcement that no sponsor has been found for 2019 means that Ireland will lose its only UCI-ranked road race. She hopes this is a temporary hiccup, and doesn’t rule out another event being held this year. “There may be an option there for a three or four day race to be run by a separate organisating committee,” she explains. “It would be a smaller, non-UCI race. Those discussions will be held in the coming weeks.

“Our hopes are that a smaller race will happen in 2019 and then the full international race will come back stronger than ever in 2020.”

The Rás has helped develop many big professional careers, including that of 1979 winner Stephen Roche and 2007 champion Tony Martin. Roche won the Tour de France and world championships in 1987, while the German went on to take multiple world time trial titles.