Olive Loughnane in line to be upgraded to world gold medal 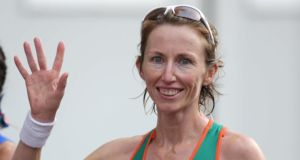 Olive Loughnane: “A part of me was half expecting this day would come, especially with so many of the Russian athletes being banned over the last year or so.”

Olive Loughnane was waiting in the passport office in Cork city when news arrived that she was now world champion. It may be almost six years after the event, but better late than never.

A little outside Cork city Rob Heffernan had just finished a training session of 10km at race tempo when news arrived that he might now be an Olympic bronze medalist. That may take a little longer to materialise, but will definitely be worth the wait.

So went one of the strangest days in the life of Irish athletics - both Loughnane and Heffernan set to benefit from the latest doping offences involving Russian race walkers.

Neither athlete was cracking open the champagne just yet, although Loughnane is almost certain to be upgraded to the gold medal from the 20km walk at the 2009 World Championships in Berlin, having originally finished second.

Gold medallist Olga Kaniskina, who also won the Olympic title in 2008, was one of five athletes banned yesterday by the Russian Anti-Doping Agency (Rusada), and, crucially, they’ve also cancelled her results from the period during those 2009 World Championships. Provided the IAAF uphold that ban then Loughnane, who finished 49 seconds behind Kaniskina on the day, will be upgraded to gold.

Also now banned is Sergei Kirdyapkin, the Russian who won gold in the 50km walk at the 2012 Olympics in London, where Heffernan finished fourth. Yet, and bizarrely, Rusada are only cancelling his results in periods from July 2009 to June 2012, and from October 2012 – with the nonsensical decision not to ban him during the actually period of the London Olympics.

The IAAF, however, are unlikely to buy that explanation from Rusada: “The usual procedure, according to IAAF rules, is to wait for the fully reasoned explanation (in English) for the sanctions that were announced today in the Russian media,” said Nick Davies, IAAF Deputy General Secretary. “Only at that stage are we then able to analyse and decide if we accept, or if we reject.”

For now then Heffernan was understandably cautious – “preferring not to comment” – about the prospect of being upgraded to Olympic bronze, and with that becoming the 29th Irish medal winner in Olympic history. But with a World Championship gold from 2013, and a retrospective bronze medal from the 2010 Europeans in Barcelona (that Russian gold medallist also banned), it would neatly complete his set of championship medals.

For Loughnane – now retired – it all made for a strangely emotional day, and part of the feeling was the sense that justice had been done.

“Of course it’s exciting, and there’s no doubt that being world champion has a very nice ring to it. There is also a sense of relief, because that was the feeling, back in 2009 and especially in the years since, that maybe those Russian athletes were just too good to be true.

“But at the time I could never dwell on it, and never allow myself to wonder what they might be taking, because as a competitor you have to focus entirely on your own performance. And that’s why on that day in Berlin I was totally satisfied, and extremely proud of my silver medal, standing on that podium, because I knew I had given it my absolute.”

But I do have to say that part of me now is thinking, well, Kaniskina was cheating, yet stood on that podium, and must have known that I was really World champion. I know as well that a lot of athletes were talking about the Russians back then, that they were very dodgy, and there were definitely pockets of Russian sport where doping was going on. But I could never allow myself to be held back by that.”

There is the minor financial matter that Kaniskina also got $60,000 for winning gold in Berlin, while Loughnane got $30,000 for silver, and it’s unclear whether the IAAF will also upgrade Loughnane’s prize money too.

“It’s funny, because the first question my daughter Eimear asked me was ‘do I get to keep the silver medal as well?’, and it will take a while before all of it becomes official,” said Loughnane, who also finished 7th at the 2008 Olympics in Beijing, where Kaniskina also won gold.

All the Russian cases relate to irregularities in the athletes’ biological passports, which monitor blood values over time to look for evidence of doping. Should the bans be upheld, it means that of the 17 gold medals won by Russian walkers at the Olympics and World Championships in the last decade, 16 were won by athletes on drugs.