Independent investigation into controversy will be held when criminal proceedings end 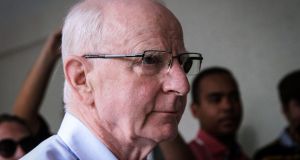 Pat Hickey (71) was arrested in Rio over the alleged illegal sale of tickets for the Olympic Games. He denies any wrongdoing. Photograph: Humberto Ohana/AFP/Getty Images

Pat Hickey has threatened legal action against his own executive committee of the Olympic Council of Ireland (OCI) to prevent them from proceeding with a report into the mishandling of the Rio Olympic ticketing arrangements in which he is directly implicated.

In what appears to be a direct challenge to the OCI, Hickey has “threatened to make an application to the High Court for an injunction preventing the completion of the review”, according to a statement from the executive committee last night.

It was also confirmed that another member of the executive committee, Ciarán Ó Catháin, also a director within the OCI, resigned from his position last night: it’s unclear whether or not this was related to Hickey’s threatened court injunction, but Ó Catháin was part of the OCI’s three-person crisis management sub-committee set up to lead the various inquiries into the Olympic ticketing arrangements.

A former president of Athletics Ireland, Ó Catháin is also president of the Athlone Institute of Technology (AIT), a role he has held since 2000.

The OCI ticketing report, being carried out independently by Grant Thornton, was commissioned by the OCI executive committee back on August 26th, a week after Hickey was arrested in Rio to face charges of ticket-touting, in what was termed ambush marketing, theft, tax evasion, money-laundering and criminal association. He has stepped aside from his role as OCI president pending the outcome of that investigation, while also claiming there was “no substantive proof of any wrongdoing on my part”.

The OCI executive committee - which last week saw the resignation of second vice president John Delaney and honorary treasurer Kevin Kilty - met at their offices in Howth last night to further discuss the findings of the Deloitte report, which had identified several failings in the organisation’s governance and management.

Instead, the decision was also made to postpone the Grant Thornton with immediate effect. According to a statement from the OCI executive last night:

“The Grant Thornton review into ticketing arrangements in Rio will be postponed and completed only following the conclusion of criminal proceedings against Mr Pat Hickey in Rio.

“This decision was taken following the receipt of a letter from Mr Hickey’s lawyers this week in which he threatened to make an application to the High Court for an injunction preventing the completion of the review.

“The Executive Committee has decided not to incur the very significant additional cost of defending any such legal proceedings.”

In the meantime the non-statutory state inquiry into the Rio ticketing scandal, which is being conducted by former High Court judge Mr Justice Carroll Moran and began on September 19th, has also been delayed due time issues, Minister of State for Sport Patrick O’Donovan confirming yesterday that “the judge has indicated that this timetable may be ambitious and some delay is anticipated”.

The OCI executive committee added in their statement that they “restated its commitment to continuing full cooperation with the Moran non-statutory State inquiry”.

Last week, lawyers acting for Hickey lodged an application with the Rio public prosecution for the return of his passport, citing health concerns for the 71 year-old, so that he could return home. There is still no date for his court hearing, which could take up to 18 months to complete.

In another development, the OCI executive committee also confirmed last night that an EGM has been called for January 2017 to elect a new executive committee; this follows the discussions around the draft publication of the Deloitte report, seen by the Irish Times last week, which highlighted inadequate audit functions and a lack of any strategic plan, and suggested the OCI had “limited or no information” on “managing conflicts of interest, behaviours and ethics and roles and responsibilities”.

According to the OCI statement last night, “the completed Deloitte report on corporate governance arrangements at the OCI will be issued to OCI member federations next week in advance of January’s EGM.”

That report also said no member of the executive committee, on which Mr Hickey sits, should serve more than two four-year terms. It says there is “strong evidence” that limiting terms “prevents the dominance of one viewpoint or mode of thought”. If accepted and implemented, the highly critical report would spell a definitive end to the 28-year reign of OCI president Pat Hickey.

The Grant Thornton report into ticketing arrangements in Rio was due for completion on November 15th, at which point, according to the OCI, “it will be sealed and passed by Grant Thornton directly to Judge Carroll Moran to consider as part of his non statutory inquiry. At no point has the OCI Executive Committee had sight of the report.”