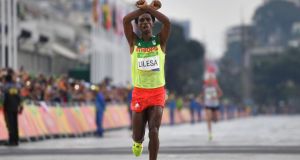 Ethiopia’s Feyisa Lilesa makes a gesture after taking the silver medal in the men’s marathon at the Olympic Games in Rio. Photograph: Olivier Morin/AFP/Getty Images 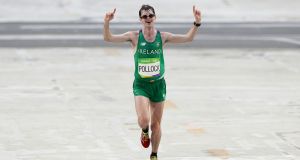 No event carries more historical prestige than the Olympic marathon, which is partly why Feyisa Lilesa couldn’t let the moment pass without making some statement about it.

In finishing runner-up to Kenya’s Eliud Kipchoge, Lilesa crossed the line with his hands crossed above his head – a sign of silent support for the Oromia region of Ethiopia, which earlier this month saw a violent government crackdown.

For Lilesa – who won the 2009 Dublin in what was his marathon debut – this was no throwaway gesture: he now fears for his safety and possibly even his life on his returning to Ethiopia, including, he says, the safety of his wife and two children.

Such political protesting is outlawed by the International Olympic Committee (IOC), although Lilesa also repeated his gesture during the medal presentation.

The most recent unrest in Oromia, on August 5th, which saw protesters demand social and political reforms, including an end to human rights abuses, reportedly ended with the killing of 90 protesters, in three days, by Ethiopian security forces.

Feyisa’s brave gesturing was matched by his brave run, although there was no denying Kipchoge, who surged ahead inside the last 10k to win in 2:08.44, improving on the bronze and silver won over 5,000m in 2004 and 2008 – with the American Galen Rupp, also trained by controversial coach Alberto Salazar, holding on for bronze.

The Irish challenge began on a cautious note but saw Paul Pollock finish with a storm, the Co Down man closing up at least 30 places inside the last 10km to finish 32nd in 2:16:24.

Behind him, Belfast’s Kevin Seaward overcome a pre-race illness to finish 64th in 2:20:06, with Dublin’s Mick Clohisey claiming 103rd in 2:26:34, his race not helped by an infected foot blister sustained in the weeks before.

“It was an okay performance,” said Pollock, who was sitting in 124th for the opening 10km. “A top-20 performance was the first goal. I went out 30 seconds to a minute slower for the first half than the plan had been, but the legs didn’t come around until the second half. I came through strongly in the second half and this should give me a good platform to produce an even better performance in the major championships.

“It’s been great to see the rise in the number of Irish athletes get the marathon standards and I’m aiming for London (World Championships) in 2017.”

Pollock, who took time out from his medical career to train for Rio, certainly answered the questions over this selection, ahead of Sergio Ciobanu, and ended up with Ireland’s best-placed men’s finisher since Dick Hooper in 1988 (24th).