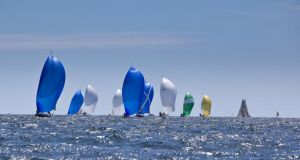 The flotilla off Crosshaven during the 2010 Cork Week. Photograph: David Branigan.

The new deal for the south coast event gives the Swedish car marque title sponsorship of both of Ireland’s top sailing regattas plus a shot in the arm for one of Ireland’s best loved sailing events.

Running without a title sponsor since 2008, the Cork Harbour biennial has already announced a number of key changes for 2014’s July event.


Reducing costs
Its racing chairman Anthony O’Leary, has made changes aimed at substantially reducing costs for the expected 100­boat plus international fleet including a four- instead of five-day programme.

Although the days are reduced, the number of races are not with at least 10 races scheduled for all classes. “The focus for is the same as it has always been, great sailing and a fabulous atmosphere ashore,” O’Leary said.

The change is designed to allow competitors to take less time off work, something organisers say will reduce overall costs by as much as 20 per cent.

The changes reflect the format adopted by the Dun Laoghaire Regatta that runs in the alternate year to the Munster event and also carries the Volvo moniker.

In other changes afloat, Cork Week has identified a growth in short-handed racing and RCYC will recognise this by introducing a two-handed class for the first time. The Sir Thomas Lipton Cup is one of the club’s most famous awards. The trophy, dating back to 1900, will be awarded to the best yacht in this class.

Nine colleges sent teams for the team racing based event in Firefly dinghies.

After a day of racing in random pools, the teams were separated into gold, silver and bronze fleets, a tribute to the very active Irish college team racing circuit.

Defending champions University of Limerick were early favourites but didn’t make it past the quarter-finals. UCD 1 met UCD 3 in the quarter-finals on Saturday, and while UCD’s third team put up a good fight against the eventual champions, they lost 2-0 in a best of three round.

UCD 2 met a very strong UCC 2 team, and the Cork side emerged victors, advancing to the semis to face UCC 1.

Trinity College Dublin met Scottish representatives SUSA in their quarter-final, and in close racing the Scots came out on top.

Intense affair
UCD 1 went on to face SUSA in the semis, while a Cork showdown happened in the other half of the draw between UCC 1 and UCC 2.

UCD 1 won their races 2-0, but the Cork battle was a much more intense affair, with Cork’s first team winning 2-1. UCD1 and UCC1 set up a winner-takes-all climax.

In the end race five brought a big lead for UCD as they took first place at the first mark and extended their lead.