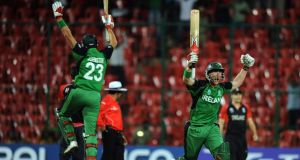 Cricket followers often bemoan the lack of television coverage of the Irish team outside of the major tournaments, but for one hour next Tuesday night on Setanta Ireland they will have few complaints as a light is thrown on the history of the game in Ireland.

Batmen – The Story of Irish Cricket makes an impressive claim to cover a time span of almost 300 years back to the first recorded game in 1730 in Dublin’s Phoenix Park, but in just one hour, it does a remarkable job of telling a story that is as much social history as sporting.

Written by journalist and cricket historian Ger Siggins, the Motive Television production certainly adds to a canon of high quality, informative sports documentaries to be produced here in recent years.

First and foremost the documentary is visually striking, with footage including Pathe newsreel from the early part of the last century, some cracking BBC footage from the famous victory over the West Indies at Sion Mills in 1969 to Ireland’s fine showings in World Cups over the past six years.

And it is far from just a straight historical account of the game, with the social and political references adding a fascinating take to how a sport that had such a widespread appeal in the middle of the 19th century throughout the island of Ireland could have all but disappeared, bar for traditional strongholds, in the space of 50 years.

Of course, many would pin the blame on the GAA, but sports historian Paul Rouse believes that theory is far too easy to reach, while also pointing the finger at cricket itself for not taking advantage of its popularity in every county in Ireland by setting down proper roots and an all-Ireland structure.

“I won’t say (cricket was) abandoned because it survived too strongly in too many places to say abandoned, but why was it abandoned by so many people,” points out Rouse on the documentary.

“And the answer to that lies, I think, in the failure of cricket itself to establish itself as the game, and to put down proper roots, put down proper structures in all of these places.

“It’s a moot point, but it’s an interesting one. What would have happened if when all the calls to establish a cricketing union in the 1870s had been acted upon and if they had put down a proper structure, which was democratic and organised, how strong would cricket have remained in Ireland.”

One area where cricket remained strong was of course Fingal in north county Dublin, and the documentary looks at just how deep the roots of the game are in the community through the generations of Irish international John Mooney’s family and one highly competitive game of backyard cricket in Balrothery.

That community also shines through in some great footage both on and off the field from The Hills’ run to the RSA Irish Senior Cup title last season, with a highly enjoyable hour’s viewing wrapped up by the feel-good factor of Mooney’s winning boundary against England during the 2011 World Cup in Bangalore.

Mooney is in line to return to international duty this morning in the four-day game against Australia ‘A’ at Stormont (11.0am) after missing out in the two one-day internationals against Pakistan.

He missed the tied game due to his three-match suspension, but his non-selection for the second game was put down to his lack of cricket by coach Phil Simmons, after the North County all-rounder missed Leinster Lightning’s opening two Inter-Provincial Series games.

Since then he took part in Leinster’s 149-run victory over the North West Warriors in Malahide, while he has been in great form with North County, with eight wickets in two games, including a match-winning five for 13 against Railway Union in the Irish Senior Cup last weekend, and a century against Phoenix in the league.

Coleraine left-arm spinner Scott Campbell is in line to make his debut at international level as a like-for-like replacement for George Dockrell, who is unavailable due to county commitments.

And with most of ireland’s county contingent missing, with the exception of Paul Stirling, Ireland face a tough task against an Australian side packed full of bowling talent, including Pakistan-born leg spinner Fawad Ahmed, who is set to make his debut for Australia ‘A’.

Batmen - The Story of Irish Cricket will be broadcast on Setanta Sports Ireland on Tuesday, June 18th at 8pm.