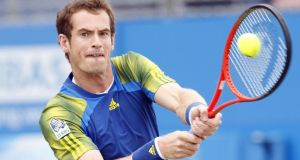 Andy Murray in action against Marin Cilic in the final of the AEGON Championships at The Queen’s Club, London. Photograph: Jonathan Brady/PA Wire

The Scot will launch his challenge for the title with a late-afternoon match against Germany’s Benjamin Becker on Centre Court.

After losing out to Roger Federer last year, Murray will be hoping this year to make Wimbledon history and become the first British man to win the title since Fred Perry in 1936.

Tennis fever has already arrived at the famed All England club, with fans flocking to join the queue yesterday.

Many faced disappointment as the tournament’s official Twitter feed said there were more people in the queue than the allocation of Centre and No.1 Court tickets for today’s play.

Wandsworth Council, Merton Council and the Metropolitan Police have introduced a special two-week dispersal zone around the club, including Southfields, Wimbledon Park and Wimbledon stations.

Anyone suspected of touting can be ordered by a uniformed policed officer to leave the zone and not return for 24 hours and anyone who returns before that deadline will be arrested.

Anyone caught selling tickets faces immediate arrest, while anyone who is believed to have purchased a ticket from a tout or any other unauthorised outlet faces being refused entry. Police have also written to known touts warning them to stay away.

Joining Murray on the opening day of play at SW19 are defending champion Roger Federer, and former winners Rafael Nadal, Lleyton Hewitt and Maria Sharapova, along with the likes of Jo-Wilfried Tsonga and Victoria Azarenka.

Murray’s is the third match on Centre Court, following the opening encounter between Federer and Victor Hanescu, and the clash between Sharapova and Kristina Mladenovic.

Hopes are high for Murray, with bookmakers William Hill putting odds for the Scot to win Wimbledon at 4/1, with punters getting their money back if he fails to make the semi-final.

Away from the British number one, there are odds of 8/1 that only one of the 10 Britons in the two main draws makes it through.

Spokesman Rupert Adams said: “The quality of British tennis is definitely improving but in reality all British hopes once again rest with one man, Andy Murray.”

Novak Djokovic is the 5/4 favourite to lift the men’s singles trophy, with Rafael Nadal 4/1 and Roger Federer 7/1, while Serena Williams is at 2/5 to lift the ladies trophy.

Other popular odds are 8/1 for a full day’s play missed for weather reasons and 33/1 for the official caterers to run out of strawberries or champagne, William Hill said.

Tennis fans could enjoy pleasant weather in the opening week of the tournament, according to forecasters.

Brendan Jones, senior forecaster at Meteogroup, the Press Association’s weather division, said temperatures may not hit the highs seen last week, but the weather does not look “too bad”.

“It should hopefully be generally dry with just a few showers coming through,” he said.

“People will see some tennis, and they might well see some sunshine if they’re lucky.”

Regardless of the weather, online ticket seller Viagogo said its research predicts a wave of “Wimbledon sickies” across the capital.

According to a poll of 1,000 customers to the ticket marketplace earlier this month, one in every 18 London workers plans to skive off work during the second week of the championship.

Wednesday July 3rd is likely to be the worst day, Viagogo said, when demand for tickets is the highest on the site apart from the respective finals.

Spokesman Steve Roest said: “Tennis fever has once again taken hold of London with all eyes on SW19. Demand for tickets to matches is as high as ever, meaning tennis fans are willing to skive off work to see their heroes in action.”