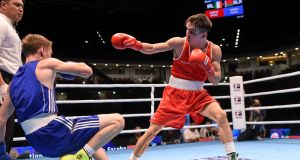 Michael Conlan became the second Irish male to qualify for a World Championship final with victory at the Ali Bin Hamad Al Attiya Arena in Doha on Sunday night.

Belfast bantamweight Conlan was at his imperious best when dispatching Dzmitry Asanau of Belarus – the world No 17 and a silver medallist at the European Games – in 56kg semi-final, claiming a 3-0 unanimous decision win, 30-27, 29-28, 29-28 after controlling the fight.

The 23-year-old will hope to surpass Jason Quigley’s 2013 silver-medal campaign when he takes on Murodjon Akhmadaliev of Uzbekistan on Wednesday – Katie Taylor has, of course, won five women’s titles at world level.

While two judges surprisingly scored the second round for Asanau, Conlan boxed a near-perfect fight and head coach Billy Walsh explained that he worked with fellow coach Zaur Antia and their boxer to mastermind tactics for the semi-final success.

“The three of us sat down together and we worked out a gameplan,” said Walsh. “This guy [Asanau] was very technical and correct and a straight puncher. We needed a bit of distance from him and his punches fell short when Michael stepped back and then he was able to go in and counter.

“Michael was working on his own feinting and jabbing and the guy was lost. He was nervous enough going in, he’s only 19.”

A short left hand from Conlan a minute into the second round forced his staggering opponent to the ropes as the Irishman used fancy footwork to dance around his opponent.

“The gameplan was to keep him at distance, keep the feints going . . . I probably could’ve feinted more, but what I done today was the right thing to do,” said Conlan, who qualified for the Rio 2016 Olympics through the World Series of Boxing earlier this year.

The Portlaoise middleweight must beat Hosam Abdin of Egypt on Thursday to be certain of booking his place at the Rio Olympics after he lost a 2-1 split decision (28-29, 27-30, 30-27) to Uzbekistan’s Bektemir Melikuziev. However, convoluted AIBA rules mean another path may possibly open up depending on other results.

O’Reilly’s counter-attacking gameplan was upset against Melikuziev as he lost the first round and the 22-year-old said afterwards: “It’s my fourth fight in a week so I’m starting to get a bit tired. I’m bound to get a little but tired . . . Four fights in such a short gap is tough, but that’s just boxing.”

A win would see him book a ticket to Rio as both finalists in the 81kg category secure Olympic qualification, but there is no box-off for a third-place slot in the 21-year-old’s light-heavyweight division.

Rasulov, the world No 15 and Asian silver medallist, stands in Ward’s way of a final place, but his coach Eddie Bolger (present in his corner, along with Walsh and Antia) is confident.

“You’d like him to get easier fights, these World Championships have proven there’s no easy fights at this level,” said Bolger.

“Joe’s opponents have been head-on, full-on, [allowing] no breathing space. He’s going to come good and he’s in a position where you can’t pick who you’re fighting but he’s fighting the Uzbek and he’s boxed him before.

“This will be a different type of fight,” continued Bolger ahead of the clash with Rasulov. “There’ll more breathing space – more tactical and technical. His condition is fantastic, you wouldn’t believe the pressure his first two opponents put on him.

“Joe’s been here before and this time we’re hoping he gets over the line, but I’m very happy with him so far,” added the coach.