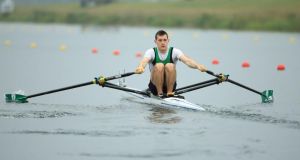 Paul O’Donovan won his heat in the lightweight men’s single sculls at the World Under-23 Championships in Varese, Italy, yesterday to qualify for the quarter-finals. Photograph: Richard Heathcote/Getty Images

Ireland qualified their first boat for the semi-finals of the World Under-23 Championships in Varese in Italy yesterday. The men’s four of Richie Bennett, Kevin Neville, Fionnán McQuillan-Tolan and Rob O’Callaghan needed to be in the top three of their repechage and they took third, pushing a bigger Russian crew into the unenviable position of being the only crew of the 13 who competed not to make the semi-finals.

Paul O’Donovan looks set to join the four in the semi-finals. The UCD man, who won his heat, competes in the quarter-finals of the lightweight single sculls today (8.44am Irish time). His brother Gary and his partner in the lightweight double, Shane O’Driscoll, will face a repechage tomorrow despite producing a rousing sprint finish in their heat yesterday. Two crews qualified directly for the A/B semi-finals and France were the clear and classy winners.

Italy and Ireland battled for the crucial second spot and the hosts seemed to have it wrapped up, but came under severe pressure from the two Skibbereen men, who finished just .48 of a second behind them.

Denise Walsh was never in contention for the top-two place she needed in her heat of the lightweight single sculls. Anna Ioannou of Cyprus won a good battle from Julie Marechal from France, but these two left the field behind.

Walsh finished fourth, winning the struggle with Russia’s Anastasia Lebedeva to avoid finishing last. The Skibbereen woman gets a second chance in the repechage.

Battleborn, which flies the Irish tricolour and is skippered by Dubliner Philip Cavanagh, was on course to finish the Great Pacific Rowing Race second overall in the race from Monterey in California to Hawaii.

Still out on the ocean waves are Boatylicious, with Irish doctor Aoife Ní Mhaoileoin on board, and Pacific Warriors, whose one female rower is Trinity College oarswoman Susannah Cass.

Back on Irish waters, the Home Internationals tomorrow at the National Rowing Centre will give club athletes a chance to shine in what should be excellent conditions. The very promising Ireland team for the Coupe de la Jeunesse had a lunch at the venue yesterday prior to flying to France for next weekend’s competition.

The women’s senior double of Monika Dukarska and Helen Hannigan (neé Walshe) was chosen after time trials for the World Championships as the selectors felt it was the fastest boat.

It was not the fastest in the time trial as stated here last Friday (mea culpa), but as Hannigan could not be in two boats at the same time, she was teamed with Dukarska and Moran with a time delay (to allow for recovery from fatigue) and with a pace boat to facilitate an objective assessment given changes in wind and flow at the National Rowing Centre.

While Hannigan and Moran proved to be e three seconds faster over the 2,000 metres than Hannigan and Dukarska, the selectors took into account that the pace boat was also faster.