McGregor: ‘It’s about sacrifices, dedication. It’s focus. I make it and that’s it’

Floyd Mayweather and Conor McGregor make weight before the Irishman does his best to intimidate the American during their stare down. Video: Reuters 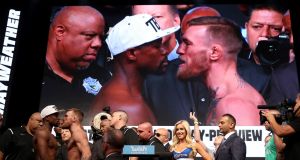 We have a fight.

Floyd Mayweather and Conor McGregor both made the weight before their much-anticipated junior middleweight showdown on Saturday night in Las Vegas.

McGregor was first on the scales on Friday at the T-Mobile Arena and weighed in at 153lbs, one pound below the division limit. Mayweather tipped the scales at 149.5lbs.

By coming in under the 154lb limit, the Irishman immediately quelled rumours – floated by Mayweather’s camp at Wednesday’s final press conference – that he was looking big and having trouble making the contracted weight.

McGregor was first into the arena, emerging slowly from the back of the room draped in an Irish flag as a clean version of Notorious BIG’s Hypnotize played on the sound system. Mayweather followed, all smiles in a white TMT T-shirt and grey sweatpants as Phil Collins’s In the Air Tonight rang around the arena.

When the fighters came together for the traditional staredown, McGregor taunted and screamed in his opponent’s face before turning to the crowd and pounding his chest while Mayweather calmly chewed his gum looking uninterested.

McGregor accused Mayweather of “being full of water” and in “the worst shape I’ve ever seen”, saying he had never had any concern about coming in on target.

“I’m a professional, I make weight,” said McGregor, who estimated he will rehydrate to around 170lbs by Saturday night. “It’s about sacrifices, dedication. It’s focus. I make it and that’s it. I’ve put in the work as everyone can tell. I’m ready.

Said Mayweather in a separate interview: “I’ve been here before. I know what it takes, what is a fight of this magnitude.”

When asked about his decision to come in four-and-a-half pounds under the junior welterweight limit, Mayweather was to the point.

The undefeated five-division champion did suffer a loss of sorts on the afternoon when Baltimore’s Gervonta Davis, a rising star in Mayweather’s nascent promotional stable, came in two pounds over the 130lb division limit for his IBF junior lightweight title defence against Costa Rica’s Francisco Fonseca.

The 22-year-old Davis, who captured the title in January to become the second youngest world champion in boxing, defended his title against Liam Smith in May but will forfeit it on the scale after failing to make the weight.