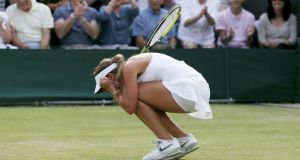 Michelle Larcher De Brito of Portugal after defeating Maria Sharapova of Russia in their singles match at the Wimbledon Tennis Championships, in London. Photograph: Stefan Wermuth/Reuters 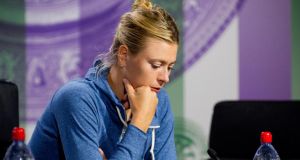 Maria Sharapova was dumped out of Wimbledon by world number 131 Michelle Larcher de Brito on Wednesday.

The former champion fumed about the grass surface on Court Two at the All England Club as she slid - almost literally - out of the tournament.

At one point the Russian, a winner of the title back in 2004 and well fancied at this year’s event, told the umpire: “This court is dangerous”.

Sharapova called for the trainer after one of her falls in the second set. De Brito remained fully focused though and held on to complete the biggest win of her career.

Sharapova’s exit, combined with the withdrawal of Victoria Azarenka because of injury (the second seed also questioned the condition of the court), leaves the bottom half of the draw wide open.

“It was quite slippery,” Larcher de Brito told the BBC. “I tried to take small steps. It was a tough court and surface to play on.”

Sharapova was reluctant to blame conditions on the court for her defeat.

“I don’t think I’ve ever fallen three times in a match before in my career so that was a little strange,” she said. “But that’s certainly not an excuse and today I’ve seen a lot of players fall and take a few hits and a few injuries.”

She described the courts as “a bit slippery on the outside” and added: “I just noticed a few more players falling than usual”.

Of her loss, she said: “It’s frustrating. You certainly don’t want to lose matches, I mean, whether it’s early or late. As I’ve said, this tournament is extremely special, and it’s definitely tough to lose. But I’m going to keep my head high about it because there’s no other way, and try to find the positives out of what I have today and my career, set new goals, and just keep moving forward.”

Petra Kvitova, who advanced due to a walkover, will now be the favourite to reach the final.

Caroline Wozniacki and Ana Ivanovic were other high-profile casualties on the third day’s play.

Wozniacki was unable to break serve at all during her 6-2 6-2 defeat to Cetkovska out on Court Two.

Cetkovska’s more aggressive game reaped rewards on the grass as she hit 30 winners to her opponent’s six.

Over on Centre Court, Bouchard followed in the footsteps of close friend Laura Robson by defeating a highly-ranked seed.

Less than 24 hours after Robson had knocked out 10th seed Maria Kirilenko, Canadian Bouchard claimed the scalp of former world number one Ivanovic.

Playing on Centre following a last-minute switch which was a result of Victoria Azarenka’s withdrawal due to injury, Bouchard was clearly the better player as she posted a 6-3 6-3 win over Ivanovic, seeded 12th this year.

The 19-year-old, who is the reigning junior champion in SW19, certainly did not seemed fazed by her surroundings. She returned the better and was constantly threatening Ivanovic’s serve which she went on to break five times in total.

She will next face Spain’s Carla Suarez Navarro, the 19th seed, for a place in the last 16.

Another seed to fall was number 27 Lucie Safarova, who lost a tight battle with Italy’s Karin Knapp in three sets.

The Puerto Rican, who sent fifth seed Sara Errani packing on Monday, moved into round three with a 6-2 5-7 6-4 victory over Silvia Soler Espinosa.