Seven withdrawals because of injury as players slipped around the courts 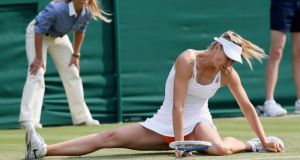 Maria Sharapova of Russia slips during her women’s singles tennis match against Michelle Larcher De Brito of Portugal at the Wimbledon Tennis Championships. The third seed was knocked out 6-3 6-4. Photograph: Stefan Wermuth/Reuters

Wimbledon’s grass courts bore their teeth yesterday and turned the normally quiet tournament infirmary into a running score on who was falling out of the draw through injury. Playing on lush grass far from baked dry by an English summer that hasn’t quite arrived, play yesterday sometimes slipped into chaos as players struggled to hold their feet.

Doubtlessly it was alarming for the All England Club hosts as third seed Maria Sharapova followed second seed Victoria Azarenka out of the tournament in the shock result of the day. The Russian literally crashed out to the 131 ranked Michelle Larcher de Brito, spilling her tall frame all over the back of the court in an infuriating afternoon.

The 2004 Wimbledon champion had followed ninth seed Caroline Wozniacki onto Court two, where she too had also slipped and damaged her ankle on the way to losing her second round match to Petra Cetkovska, ranked 196 in the world.

Sharapova spoke to the umpire and the amateur lip readers saw her say “This court is dangerous”. The Russian fell three times and needed a medical time-out on her way to losing 6-3, 6-4.

“I don’t think I’ve ever fallen three times in a match in my career. Today I saw a few players fall and take hit,” said Sharapova. “That’s what we have to put up with. It was a bit slippery on the outside, I just noticed a few more players falling than usual. I don’t think I’ve seen as much in the last few years.”

Pressed on what she said to the umpire, Sharapova didn’t deny she told her that the court was not safe.

“After I buckled my knee three times that’s obviously my first reaction and I’ve never fallen three times in a match before,” she replied. “I haven’t checked my hip yet. I haven’t had time. I think I strained my muscle.”

Unsure of her footing, unhappy with the situation, Sharapova hit returns out that would normally be winners and was clearly out of sorts, handing a delighted De Brito the match in just over an hour and a half. This, however, was the end of a long day of withdrawals and retirements.

Just 20 minutes into yesterday’s play, the top seeded American man John Isner retired from his second-round match against Adrian Mannarino of France with a knee injury. That appeared to kick start the court chaos and an hour later, Steve Darcis, who had knocked out Rafael Nadal on Monday, withdrew because of a right shoulder injury, which he thinks he picked up diving against the Spaniard.

Shortly after that Azarenka, limped out of her second-round match against Flavia Pennetta, having injured her knee in the first day’s play.

Late in the afternoon on Centre Court a knee injury forced the sixth seed Jo-Wilfried Tsonga to quit his match against Ernests Gulbis after three sets. Tsonga had earlier called the trainer and taped the knee but the Frenchman struggled to move and surrendered shortly afterwards.

By then Radek Stepanek had already retired with a hamstring injury, while the men’s 10th seed Marin Cilic had also withdrawn with a knee injury.

Just before Sharapova skidding out, Wozniacki kept playing after stumbling and hurting her right ankle early in her match against Cetkovska, but lost, 6-2, 6-2, while Yaroslava Shvedova withdrew injured from against eighth seed Petra Kvitova.

“I would say very black day,” said Cillic. “I mean, the other days, other weeks, there were no pull outs. I mean, just happened today everything. So difficult to say what’s the explanation. Athletes are driving themselves to be at their limits. There is always a fine limit between overdoing and being in 100 per cent shape.”

Tsonga was also far from accusing as he had carried his tendon injury into the championships. It wasn’t the green courts that were at fault.

“No, there is nothing about this court. They great,” said Tsonga. “For myself, you know, the weather is not that good to play tennis because it’s cold outside. I would like to have a tournament in Africa. ”

Wozniacki was consolatory. “I’ve rolled my ankles on hard court, on clay,” she said. “I don’t think, you know, you can really point a finger on exactly what happened.”

Seven withdrawals, one off a record eight. A day to remember.