Manny Pacquiao signs off with win over Timothy Bradley 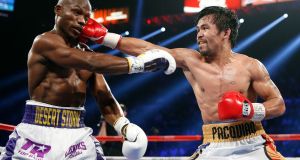 If it was indeed the final fight of an unforgettable career that launched him from unspeakable poverty in the rural Philippines to worldwide fame and fortune, then Manny Pacquiao went out with the crowd-pleasing brio that was his calling card.

The fighting congressman from Sarangani province dropped Timothy Bradley in the seventh and ninth rounds en route to a unanimous-decision victory on Saturday night at the MGM Grand Garden Arena. All three ringside judges scored it 116-110, as did the Guardian. Afterward he confirmed the central selling point of the promotion: that it was his last fight.

“Yes, I am retired,” Pacquiao said. “I want to go home to my family and serve the people.”

Pacquiao’s first outing since coming up short against Floyd Mayweather more than 11 months ago found the fighter at a curious point. The ill will left over from an underwhelming showing in the fight of the century and the anti-LGBT rhetoric that cost him an endorsement deal with Nike had cast him, to some extent, in the unfamiliar role of heel. Instead it seemed the moment was there for Bradley, whose own Hall of Fame career was for so long obscured by their first fight – a highly disputed split-decision win – to step up and finally claim the respect he deserves.

Pacquiao (57-6-2, 38 KOs) appeared eager to be the aggressor when the opening bell rang but the first round soon became a tactical clash that saw the fighters pawing with jabs and taking the other’s measure. Even when both men opened up by the third, the action came in bursts.

Bradley (33-2-1, 13 KOs) enjoyed his best moments early in the fifth, backing Pacquiao up along the ropes and connecting with a chopping right early before a left-right combination upstairs. But Pacquiao immediately responded in kind and the pair traded hellfire in the center of the ring with the Filipino getting the better of the exchanges. For a moment it was the Pacquiao of old. When the bell rang Bradley’s trainer Teddy Atlas had climbed through the ropes and berated his fighter before he could even take his stool.

By the sixth Pacquiao had found his range – a dangerous prospect for Bradley given his hand-speed disadvantage – and in the seventh he dropped the American with a short right hook. It was a flash knockdown near the end of a strong Bradley round that might have been ruled a slip, but referee Tony Weeks’ ruling stood. Far more convincing was the counter left in the ninth than landed flush and dumped Bradley to the canvas.

By then Bradley seemed to know he needed a knockout to win, which made him more vulnerable than ever. He reverted to circling around Pacquiao and pawing with the jab precisely when he needed to step on the gas. The crowd rose to their feet for the final minute – perhaps the last of Pacquiao’s career – before the bell sounded on the 36th round of the trilogy.

“I did everything I could to get him to come to me,” Bradley said. “He was just super smart tonight. He was the smarter man. He’s the best fighter I’ve ever faced in the ring.”

The malleability of retirements in boxing is their essential quality, but Pacquiao’s promoter seemed to accept this was the end. “As far as I am concered, until I hear differently, Manny Pacquiao has retired from the sport of boxing,” the Top Rank CEO said afterward.

No one does a nostalgia act like Las Vegas. Over the past few years there’s been none bigger than Pacquiao. At 37, he is still a world class operator, one of the world’s 10 best welterweights capable of beating nearly anyone put in front of him. But for years he’s been marketed as the one-man wrecking crew whose concussive knockout power felled a parade of bigger, stronger opponents.

In reality it’s been seven years since he stopped an opponent inside the distance, a recession attributed to both his ascent to welterweight and the encroachment of Father Time. If Saturday’s fight is his farewell, it’s as good as place to walk away as any.

“My heart is 50/50,” he said when pressed. “I might enjoy my retired life or I might want to come back. It’s hard to say because I’m not there yet. But right now my decision is to retire.”

Simon Zebo is heading back to Munster next season 13:13
Seedorf wants to ban players covering mouths while talking 11:44
Liverpool leaning on Salah more than ever right now 11:20
Four Leinster players nominated for European Player of the Year award 10:37
Chelsea have a free hit from here but may not get a better shot at it 08:49