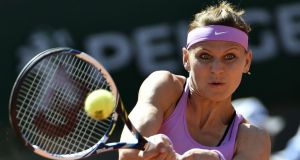 Lucie Safarova is through to the first Grand Slam final of her career as the Czech extended her remarkable run at the French Open with a surprise victory over Ana Ivanovic.

Safarova has previously played only one major semi-final, when she lost at Wimbledon last year, but the world number 13 overcame early nerves to beat Ivanovic 7-5 7-5.

The win represents another major scalp at Roland Garros for Safarova, who knocked out second seed Maria Sharapova in the last 16, and she will now meet either Serena Williams or Timea Bacsinszky in Saturday’s final.

“I started a little slowly today but I tried to keep up the level and started to play really aggressive because that was only the way to win. It’s unbelievable.”

Ivanovic came into the match on the crest of a wave after reaching her first semi-final since winning her sole Grand Slam title in Paris seven years ago.

The Serbian made her confidence count in the early exchanges as she dominated Safarova with a powerful forehand from the back and raced into a 4-1 lead.

Safarova was struggling to find a foothold in the contest but was handed a lifeline in a lengthy sixth game when Ivanovic had two break points to go 5-1 ahead but spurned both and allowed Safarova to hold for 4-2.

It proved to be a pivotal moment in the contest as Safarova sparked into life, driving her whipped forehand into the corners and breaking back to level at 5-5.

The fightback seemed to melt the confidence of Ivanovic, whose own forehand began to go awry and whose serve started to crumble under the pressure.

Two double faults gifted Safarova another break for 6-5 before a snatched volley into the net helped the Czech hold to love and clinch the first set.

Ivanovic regained her composure at the start of the second but she could not halt the momentum of Safarova, who claimed her eighth game out of nine to go 3-1 up.

A brilliant backhand from Ivanovic reduced the deficit to one but she was unable to break and Safarova served for the match at 5-4.

With the end in sight, Safarova suddenly lost her nerve as she served three double faults, including one on match point, to give Ivanovic a gutsy break but the Serb failed to consolidate and Safarova was again one service game away.

This time she made no mistake, serving out her third match point to complete a superb victory in one hour and 52 minutes.