Leinster’s depth gives them the edge at College Park 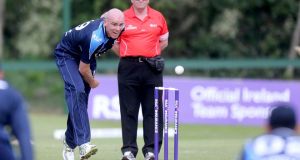 The road to gaining first-class status for the RSA Inter-Provincial Championship is set to get underway in second-rate weather conditions at College Park in Dublin this morning when Leinster Lightning host North West Warriors (11.0am).

A mixed weather forecast moving from sunny spells to hail and even thunder is not ideal for the opening of the three-day competition, which marks the North West’s debut.

Warriors coach Bobby Rao has decided to take up the option of using two overseas professionals, with South African Ramano Ramoo of Bready and Donemana’s Pakistani all-rounder Kamran Sajid both included in a 12-man squad. Ireland international Stuart Thompson misses out due to exams.

Johnston will sit out the game after playing in the one-day victory over the Northern Knights, but even in his absence Leinster look to have more depth in both their batting and bowling.