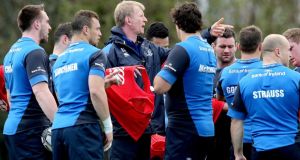 Leinster will have to win every match until the end of the season if they are to fulfill their ambitions for this season, according to forwards coach Leo Cullen.

Sitting fifth on the Pro12 table, their schedule following the euphoria of the Six Nations final day drama is pretty unsympathetic, with Gregor Townsend’s Glasgow arriving this weekend and Bath in less than a fortnight. The next two weeks could spell boom or bust for this season’s trophy hunting.

Never one for ignoring what’s in front of him either as a player or coach, former lock Cullen knows that if Leinster slide any further off the top four, they could lose touch with the play-off places. So close to the end of the season, that could be a coffin nail.

“It’s massive. We need to win our home games, particularly against those teams around us,” said Cullen. “It was disappointing to lose that home record against Dragons. Glasgow are on top of the league. We are in fifth. We can’t afford many slip-ups now.

“We need to, pretty much, win every week. It’s going to make life difficult if we lose at the weekend. We all know the importance of the game.”

Leinster have been hard hit by Ireland’s Six Nations campaign and last week there were just 21 of them in camp at their UCD headquarters. The script now involves juggling the IRFU player welfare system with the need to feed bodies back into the club system after months away. In the past there have been two Pro12 games, not just one, before Europe kicks in after the Six Nations.

“We’re into a sprint now to the end of the season,” said Cullen. “We have a lot of fit bodies that we didn’t have earlier in the year.

“We’ll just assess over what bodies are in best shape to take us into Glasgow on Friday. Some guys won’t play this week, with a view to Bath the following weekend.

It’s an interesting situation in which Leinster find themselves and Glasgow may have the same issues regarding the availability of their internationals. But while the Glasgow players returning from Scotland may not have a Six Nations trophy in tow, they have a number of characters who, if healthy, can make an impact.

Fullback Stuart Hogg made the most yards in the championship and beat the most defenders, while lock Jonny Gray made the most tackles with 84, missing only one. For their impact on the tournament, both Gray and Hogg have been nominated for the Player of the Championship award.

“They are in a similar sort of situation to us in that they have a lot of international guys coming and going. It’s hard to predict what sort of team they have,” said Cullen.

“We have played against them in play-off games over the last couple of years. We’ve had some good tussles with them in the normal domestic league as well. Glasgow are a well-coached team and have a very big squad, so even if they’re missing international guys it doesn’t necessarily weaken their team because they have a good squad of players.”

For now it’s tomorrow and the canny Townsend arriving. But the end is racing towards Cullen, Matt O’Connor and co.

“Someone will have been crowned European champions in less than six weeks,” he says. “It’s a bizarre thought.”

Not if it’s Leinster.