Australia had made fine start in 311 chase at Trent Bridge 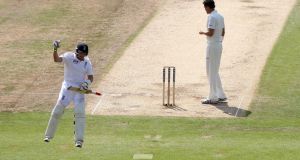 England snared three wickets late in the fourth evening to put themselves in charge of a gripping first Ashes Test at Trent Bridge.

Ian Bell’s 18th Test century in the opening session had eased the home side’s lead out to 311, a ground record chase and one that Australia have bettered just twice in Ashes history.

They will start the final day 174 on six, needing 137 more – an unlikely equation but one you could hardly discredit in this captivating see-saw encounter.

At 161 for three on a pitch that was stubbornly refusing to deteriorate, the tourists were making heady progress.

The balance of power was once again proving impossible to read, but that changed when England removed captain Michael Clarke, Steven Smith and Phil Hughes in the space of 18 dramatic balls.

Broad made the crucial intervention when he had Clarke caught at the wicket.

After Broad refused to walk for a huge edge that was given not out yesterday, Clarke stood his ground after a much slighter nick.

Umpire Aleem Dar gave Clarke out after checking the ball had carried to Matt Prior’s gloves and the batsman then used his side’s final DRS review in a vain attempt to win a reprieve.

TV umpire Marais Erasmus, whose decision to give Jonathan Trott on day two incensed England, sent Clarke on his way.

Graeme Swann then pinned Smith lbw on the back foot to leave Australia 150 short and five down.

Phil Hughes followed the mini-procession, DRS overturning a not out lbw decision against Swann to leave him with an eight-ball duck.

Brad Haddin and Ashton Agar, promoted from 11 to eight after his record-breaking 98, are the not out men.

England had earlier finished 375 all out, Bell going from 95 not out to a richly-deserved 109 and Broad making 65 – his best score against Australia and easily his most contentious.