Ken Doherty: Snooker here has great tradition, it’d be a shame if it died out 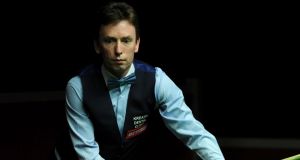 Ken Doherty during his match against Reanne Evans during the World Championship Qualifying at Ponds Forge. Photo: Tim Goode/PA

Former world champion Ken Doherty insists that Ireland cannot be complacent if is to preserve a fine snooker tradition.

The 45-year-old from Dublin failed to reach the Crucible at the third and final hurdle yesterday after losing his Betfred World Championship qualifier 10-3 to England’s Mark Davis.

Doherty, now also a respected BBC presenter and pundit, lifted the trophy in 1997 - but will be missing the 17-day tournament as a player for the fourth time in eight seasons.

That follows the exit of Irish hope David Morris, now 26, from Kilkenny who went out at the first qualifying round stage to Lee Walker.

Fergal O’Brien is in action later this evening against Kurt Maflin but Doherty said: “I honestly believe there is talent out there in Ireland but a lot of clubs have closed down in Dublin and the kids don’t have the facilities.

“I did a show once trying to find young prodigies - I found talent, but a lot were playing houses or sheds rather than clubs, which weren’t there anymore.

“Initiatives like the CueZone into Schools pushed by the WPBSA, where children can play for free is the way forward. Some of that has been done in Ireland, but we could do with more.

“I put a couple of tables into my old school and it worked a treat, kids that weren’t showing up for school were banging the door down and the teachers made it a quid pro quo, table time for lessons. Attended. It worked a treat and there was great feedback.

“But snooker in Ireland and Northern Ireland has a great tradition and it would be a real shame if it died out, I grew up watching Alex Higgins and he inspired me.

“You want to try and inspire other kids but they must have the facilities and the opportunity.”

Doherty could not have faced a much tougher opponent at this stage than Davis, who equalled the record at nine for the most times reaching the Crucible via qualification.

But he vowed to try and make it back at least one more time before calling time on his glittering career.

He added: “It is always difficult and very disappointing to lose in the World Championship qualifiers, but I got off to a terrible start, I should have been 3-2 but went 4-1 down and he gained confidence.

“He played very well, and is one of the toughest I could have had at this stage, and I was simply too far back today to get back at him.

“I wasn’t able to play at the standard I am used to. Playing at the Crucible is a very special feeling and when you miss out on it, it hurts a lot.

“I have had some very good times there and hopefully I can have one more time there before I hang up my cue, though it is getting more difficult every year.

“It has been a bit alternate years for me the past few, I have missed out but then come back and qualified the year after.

“But it has felt more difficult this year, to win three matches for anyone outside the top 16 is a lot harder even for those rankled 16 like Michael White as we have seen.

“So you cherish even more the times you have been to the Crucible and that would be my message to the lads that win today, cherish it because it doesn’t last forever or happen every year.

“I don’t actually know why they treat this tournament differently, although I know the reasons and pressures - whether it is a flat 128 draw, or qualifiers playing to meet a top 16, it should the same for all tournaments.”