Harrington feels self-belief soar as she qualifies for final 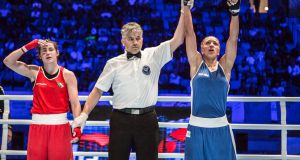 France’s Estelle Mossely is declared the winner of the lightweight semi-final against Ireland’s Katie Taylor at the Women’s World Boxing Championships in Astana, Kazakstan. Photograph: Inpho/AIBA

Her body language said it all. Katie Taylor’s pain at losing a second fight in a matter of months will take some time to dissipate.

The champion was 2-1 up going into the final round of her lightweight world semi-final at the Barys Arena in Astana, only to let it slip against Estelle Mossely, who she had beaten last year at the European Games in Baku and the European Championship final two years ago.

Both of those fights were also close but unlike all of the other World Championship bouts since 2005, this one did not fall to the Irish champion. The only grain of comfort she can take away is that Rio qualification was already secured.

Still, that is cold comfort for the five-time world champion, who the judges believe fell away to move from 2-1 up after three rounds to losing the bout.

Mossely will be in Rio. So will the Azeri southpaw Yana Alekseevna, who beat Katie in the recent Rio qualifiers, and all three of them in an Olympic field of 12 boxers. It could be that Taylor will go to Brazil without her customary number-one seeding.

“I have another chance thankfully in the Olympic Games. So we will see how that goes,” she said. “The semi-finals of the world championships are always tough fights. There are no easy ones at this stage . . . just very disappointed.

“We didn’t know how it was going because we don’t get scores between rounds. I’m just not sure . . . It’s hard to say just after a fight. I’ll have to obviously look back at the video and see what went wrong. My plan was to come over here and make history. Unfortunately that didn’t happen.”

Ireland head coach Zaur Antia was keeping his real thoughts to himself. But he believed Taylor had won.

“A close fight against a good boxer,” he said. “I will look again but she did everything possible to win the fight. I think this time she won better. That is my opinion.”

The second was more action-filled and early on Taylor unloaded a few combinations, with Mossely responding. It looked as though Taylor edged it but two of the three the judges called it for Mossely.

Taylor again went to work in the third. Her range was a little off but she was much the busier boxer and that’s how the judges saw it, with all three of them handing her the round 10-9.

It looked like Taylor may have edged it with her better speed and her volume of shots. But Mossely stayed aggressive and the judges gave her the round.

The split-decision went to the French boxer and stunned the auditorium. It was difficult to see where Taylor lost it.

Most of the boxers watching had never seen the Irish lightweight lose a fight and probably none had seen her last world defeat 10 years ago in Russia. “I thought she had a very good first round, a good second round,” said assistant coach Eddie Bolger.

“Third round was a little bit closer but we don’t want to rain on anybody’s parade. I think she was even better here than she was in Turkey and she will come back from this. She will be even better in Rio.”

Harrington has stolen people’s hearts at these championships with her open ‘can’t believe this is happening’ attitude and has appeared to get better every round.

“This is world-class boxing here and I’m finally starting to believe what people are telling me,” said Harrington, who won every round against Canadian Sara Kali.

“I’ve been boxing 10 years and that was the main problem. I was always what if, what if. If I was away I’d be very unsure of myself, thinking these are all great boxers. I’m just as good as them. I just never had that confidence before. Something just clicked.”