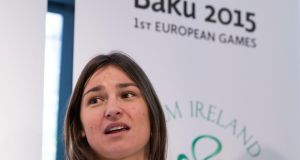 If it still feels like Baku has been missing one proper headline act at these first European Games that should change on Sunday afternoon when the most decorated women’s boxer of all time makes her entrance.

It’s Katie Taylor’s first competitive appearance since winning a fifth successive World title in South Korea last November. Taylor is a Baku Games ambassador and carried the Irish flag in last weekend’s opening ceremony, and this title, should she win it, will feel like another of her dates with destiny.

Of course for Taylor, who turns 29 next month, it will be nowhere near the scale of sporting achievement of three years ago, when she was among the first ever Olympic gold medal winners in women’s boxing

Having already won 17 major championship medals, at least part of her motivation is to ensure no one walks away from Baku with this title, for the first time, without first beating Taylor.

There may be other motivating factors, too, including the fact Pat Hickey, president of the European Olympic Committee and the driving force behind these Games, has always championed Taylor’s role in women’s boxing, and there was no way he was going to be left without Ireland’s headline act. With other famous Irish Olympians already in Baku at Hickey’s invitation, including Sonia O’Sullivan and Ronnie Delany, there’s no hiding from his sense of achievement already.

What is certain is Taylor won’t have it all her own way in tomorrow’s opening bout (2.30, Irish time), when she will line up against her old lightweight rival Denitsa Eliseeva – the last boxer to actually defeat Taylor, in 2011, at the Multi-Nations event staged in Eliseeva’s native Bulgaria, albeit in highly dubious circumstances.

What is equally certain is that Taylor will have left nothing to chance. She has been in camp in Baku since June 2nd, only briefly appearing for that opening ceremony and to take part in a promotional video for the games.

There is no Sofya Ochigava, the Russian boxer who Taylor defeated in the final of the London Olympics, but the hope is it will be equally competitive.

If Taylor wants to ensure the European Games gold medal is worthy of sitting anywhere alongside her other titles, she’ll want and need to feel like she earned it.

1 Ireland boss Stephen Kenny: ‘I’ll do things my own way. Put it that way’
2 Andrew Conway diary: Nailing the wheelie bin challenge on the double
3 Masters Meltdowns: How even Major winners wilt under Augusta’s intense spotlight
4 Damian Browne: To the ends of the Earth in search of the ‘savage warrior spirit’
5 Welcome to my world: Brendan Boyce walks on as everyone else joins in
Real news has value SUBSCRIBE