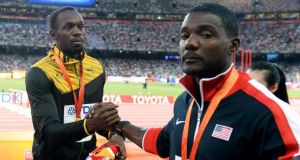 Justin Gatlin has vowed to boycott the BBC and British media over their coverage of his 100m showdown with Usain Bolt at the World Championships in Beijing. Photograph: PA

The world 100m silver medallist, Justin Gatlin, has vowed to boycott the BBC and other British media at the championships in protest at their “biased” reports of his clash with Usain Bolt in Beijing.

The US sprinter, twice suspended for taking banned substances, was narrowly beaten by just one hundredth of a second by Bolt in a race that had been characterised as a battle for the soul of the sport or a clash between “good and evil”.

“He’s saved his title, he’s saved his reputation – he may have even saved his sport,” enthused the BBC commentator Steve Cram as Bolt crossed the line in 9.79sec, fractionally ahead of the seemingly unassailable Gatlin.

Footage posted on Twitter showed Brendan Foster and other BBC commentators celebrating as Bolt crossed the line and Gatlin is understood to have shunned the three different interviewers from the BBC after the race.

The sprinter believes he has been unfairly vilified by not only the BBC but the rest of the British media, who he feels have focused disproportionately on his doping past.

“Justin, as well as I, feel that the British media and journalists have been extremely unkind to him. There’s been nothing positive said about him now for some time. Every characterisation is solely about doping and vilifying him,” his agent Renaldo Nehemiah told the Guardian.

“So, to maintain his own dignity and self respect, he feels it best not to speak to them. It’s very unfortunate, but he’s been hurt tremendously by these attacks. And as human beings, we should be better than that. The BBC in particular should report without lacing their comments and reporting with biased views.” The BBC has yet to comment.

The US sprinter was first banned in 2002 after amphetamines were found in his system related to medication he had been taking for attention deficit disorder for 10 years. A two-year ban was later reduced to one.

His second ban in 2006, initially eight years but later halved to four, was blamed on testosterone he claimed was rubbed into his buttocks by a masseur with a grudge.

Since coming back to the track in 2010, the 2004 Olympic champion has gone faster and faster. Until his defeat by Bolt in the 100m final, Gatlin had gone 29 races unbeaten and at the age of 33 recorded a personal best of 9.74sec in Doha.

He has insisted that it is unfair to call him a “two time doper” given the nature of his first offence. “There’s no end to this,” he told Sports Illustrated earlier this year. “I served my time. I did my punishment. I sat out four years and here I am, still getting punished for something that happened to me, literally, a decade ago.”

Gatlin was asked three times about his doping past in the post-race press conference on Sunday night and each time answered: “I am thankful.”

When he was then asked whether he thought the sport’s governing body, the IAAF, would be relieved that Bolt had won he again replied: “I am thankful.” His questioner walked out in disgust.

US athlete Justin Gatlin gives his reaction after winning the silver medal, 0.01 seconds behind Usain Bolt in the World Athletics Championships in Beijing.

For his part, Gatlin may believe there is nothing more to be said on the subject and feels unfairly singled out given there were three other competitors in the final who had also served doping bans (the Americans Tyson Gay and Mike Rodgers, along with Bolt’s Jamaican team-mate Asafa Powell).

Gatlin will clash again with Bolt in the 200m later this week, with the final on Thursday due to be just the second time they have raced over the distance.

Before winning the vote to become the next president of the IAAF, Sebastian Coe had said the prospect of Gatlin winning the 100m made him feel “queasy”. But he subsequently said that there was nothing in the rules to prevent the American running having served his bans.

The International Olympic Committee president, Thomas Bach, said last week he would favour lifetime bans but accepted they were not legally enforceable. “If you have an athlete who has served his suspension then he has the right to participate in championships,” he said.