Argentinian continues his impressive renaissance with win over Dvaid Ferrer 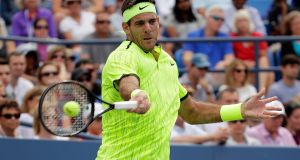 Juan Martin del Potro is as surprised as anyone that he has reached the US Open last 16.

Del Potro cruised past Spain’s David Ferrer 7-6 (7-3) 6-2 6-3 to make his first major fourth round since Wimbledon three years ago.

The Argentinian has endured a nightmare spell since then with injury, after a chronic wrist problem meant he missed nine grand slams in a row.

Returning at Wimbledon this year, Del Potro is finally hitting the sort of form that saw him become world number four and a champion at Flushing Meadows in 2009.

He clinched a silver medal at the Olympics last month, losing to Andy Murray in a brutal final, and now faces Austrian Dominic Thiem for a quarter-final spot in New York.

“I didn’t expect to be in the second week of this tournament,” Del Potro said.

“Of course, I just want to be free with my wrist, trying to play in a good level as I did couple of years ago but I think I’m surprised with my level at the moment.

“I’m surprising the guys on tour, my colleagues. That’s great because I’m seeing I can be dangerous in the future once again.”

Thiem made the French Open semi-finals in May and is a rising star, having beaten both Roger Federer and Rafael Nadal already this year.

The 23-year-old came from behind to oust Pablo Carreno Busta 1-6 6-4 6-4 7-5, and Del Potro believes his opponent starts as favourite.

“I don’t consider myself favourite. He could be the favourite, for sure,” Del Potro said.

“But it all depends on my physicality, on my body, on my game. If I play like this today, I will maybe have chance to do a great match against him.”

Another player rediscovering form is Grigor Dimitrov, who beat Portugal’s Joao Sousa at Flushing Meadows to set up a fourth-round meeting with Murray.

Dimitrov made the semi-finals at Wimbledon in 2014 but has failed to go past the fourth round at a major tournament since.

The world number 24 appointed Murray’s former coach Dani Vallverdu to his team this summer and says he feels rejuvenated.

“I fell in love with tennis again. It’s simple as that,” Dimitrov said.

“It’s not only because I’ve been winning matches or anything like that. It’s because I started to enjoy the process again.

Murray was made to work hard for a four-set victory over Italy’s Paolo Lorenzi while 14th seed Nick Kyrgios retired with what appeared to be a hip injury against Ukraine’s Illya Marchenko.