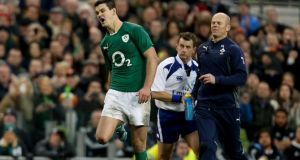 I’m Irish. And that’s fine: happy to be so, in fact. Proud? Sure, why not? Just as a Spaniard is as proud of Spain, or an American of the US, or a Lao of Laos. And while not claiming any kind of singularity, like most people, hopefully, fingers-crossed, the accident of the particular rock I got dropped on isn’t the most notable thing about me.

That’s not to say nationality is irrelevant to identity, just that people’s ideas of it differ. Admittedly that’s a concept we have a history of struggling with here, mainly because too many people spend too much time insisting the most important thing about them is their own version of Irishness. In real life, the story is always individual.

Sport, though, sells the illusion of the collective, and if it’s Irish sport that seems to mean any amount of hopelessly generalised, furrow-browed presumption can be passed off as valid criticism instead of getting filed under cod-psychological balls at the Central Library of Californian chance-your-arm bullshit.

Apologies about that California stereotype, but the Golden State is big enough to take it, and since this space panders to caricature more than most, then yay for stereotyping.

Right now in Adelaide, for instance, the cricket media is readying vivid pictures of the second Ashes test that will often revolve around cartoon representations of ocker Aussie galah-dom and uptight, chinless poms; foul-mouthed, schooner-swilling diggers with the IQ of a wheelbarrow beating the snot out of stiff-upper-lipped Nigels.

Great fun
And it’s great fun, because everyone’s in on the game, and only the most witless can take it seriously. No doubt some indignation will be built up over a few players effing and blinding and throwing a few shapes but no one’s ever mistaken an Ashes crease for a finishing school. And it was noticeable how concern for Jonathan Trott and his all-too-real struggle with depression transcended any stereotypical divisions when it became public.

Nothing so serious surrounds the continuing post-mortem on that match between Ireland and the All-Blacks which is maybe a contributory factor towards the ongoing cudding on why Ireland lost.

The entirely reasonable conclusion that Ireland lost because New Zealand were better has been mostly drowned in a vat of colon-scouring self-absorption that boils down to Ireland losing because, well, they’re Ireland. End of.

Now no one appreciates the demands of filling space and air-time more than yours truly. But the game and its aftermath has become a new high-water line of faux-profound codology. Not even Saipan resulted in such a depth of colonoscopic introspection about why we as a race are supposedly doomed to a fate of moral victories and glorious defeats.

Never mind that that is news to Rory McIlroy, Katie Taylor and any other number of elite star Irish performers on the world scene. Of course they’re in individual sports but even in terms of team sports, no one has ever mistaken Roy Keane or Brian O’Driscoll for feeble-minded waifs unwilling and unable to bend events to their own will. But you’d be hard-pressed to recognise that from some of the national self-flagellation on the back of the All Blacks defeat.

Even paying only cursory attention has meant learning that that fateful last minute at the Aviva wasn’t about anything as mundane as New Zealanders passing the ball to someone they knew, but variously a vivid illustration of post-colonialism, lack of national self-esteem, a genetic predisposition towards melancholia, a deep-rooted fear of winning, a deeper-rooted fear of failure, all of it combined with a lack of BELIEF inculcated by emotionally distant mothers who taught their little boys at the dug the sight of an All-Black shirt automatically means dissolving into puddling fear.

Unworthy
When Jonny Sexton missed that kick, it wasn’t because he bottled it, or his hamstring went “twang”, or he took too long staring at the ball because he was browning himself: it was in fact because the Ireland number 10 knew in his marrow he and the other green-shirts were unworthy of entering the third-eye realm of rugby consciousness that beating New Zealand represents. They didn’t BELIEVE.

I’m sorry but I don’t recognise the overwrought and absurdly grandiose pictures being painted as to why one team lost and the other won. I do recognise the punditry impulse to paint a lot of jargon in a coat of hyperbolic crap, which is no more a purely Irish phenomenon than losing to the All Blacks is. But there’s a chance people might actually start believing this stuff about not winning being a sign of some specifically Irish moral turpitude.

My own perhaps pitifully two-eyed view is that Ireland lost because they got tired. And when you get tired you make mistakes. And that’s fixable: train harder, and better. End of.

Hackery, and sports hackery in particular, lends itself to huge generalisations, but tracing missed tackles back to a complex about the famine, or 800 years of oppression, or failure to balance a national cheque book is rubbish. Sometimes missing a tackle is just that, missing a tackle. Except pointing it out doesn’t take long, and it’s only a sentence; just as there’s only a sentence in pointing out that there’s hardly disgrace or shame in trying your guts out and still coming up short.

There used to be an Irish acknowledgement of that reality, now perhaps starting to get lost in a deluge of trite Americanisms about WINNERS. But I choose to BELIEVE it’s still an Irish attitude.