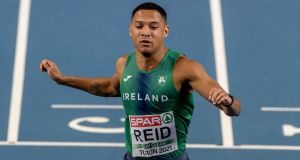 Athletics Ireland has declined to comment on reports that Irish sprinter Leon Reid was among five men charged with drugs, firearms and money-laundering offences in Bristol Magistrates’ Court last week, just over three months before he was set to represent Ireland in the Tokyo Olympics.

Reid is now facing charges relating to a South West Regional Organised Crime Unit (SW ROCU) investigation into the large scale supply of drugs, possession of firearms and ammunition, and money laundering; individually, he is facing charges of conspiracy to supply class A (cocaine), permitting premises to be used in the production of class A (crack cocaine), concealing criminal property, and acquiring criminal property.

He was released on court bail, with one of the five men remanded in custody; Reid has not yet entered a plea and is due to appear again at Bristol Crown Court on May 12th;

Full details of the arrest, first reported by Matt Lawton for The Times, have also been made available by SW ROCU. The five men were arrested last year as part of Operation Venetic, “the UK law-enforcement response to the takedown of encrypted global communications service EncroChat”.

Items including six encrypted phones, a Glock 19 handgun, a carbine conversion kit, a silencer, an extended magazine, ammunition, eight kilos of cocaine, four kilos of crystal MDMA, 3,000 ecstasy tablets, a hydraulic press, and £434,000 cash have also been seized during the investigation.

On request, Athletics Ireland released the following statement: “Athletics Ireland has been notified today that an Irish international athlete, Leon Reid has been charged with a criminal offence outside the jurisdiction of Ireland.

“Athletics Ireland cannot comment further until all elements of due process have been completed.”

The 26 year-old Reid, currently living at an address in Bath, switched his allegiance from Great Britain to Ireland in the summer of 2018, and is currently within reach of the ranking qualification quota for the 200 metres at the Tokyo Olympics in July.

Reid won a series of underage sprint medals when representing Britain, including a silver medal in the European Under-20 200m in 2013.

Citing a “lack of leadership” in British athletics, he looked to switch allegiance to Ireland in 2017, that transfer coming through just in time for the 2018 European Championships in Berlin, where he made the 200m final. His 200m best is 20.27, and is currently well on track to qualify for Tokyo.

Racing in Ireland for Menapians AC in Wexford, Reid improved his indoor 200m best to 20.99 seconds in February, and his 60m best to 6.68 seconds, earning his place on the Irish team for the European Indoor Championships in Poland earlier this year.