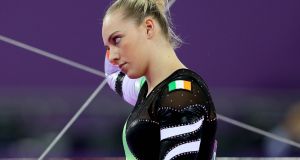 Ellis O’Reilly has sealed her place at the Olympics. Photograph: Inpho

Irish gymnast Ellis O’Reilly made history in capturing a place at the 2016 Rio Olympics on Sunday night - becoming the first Irish female gymnast to ever qualify for the games.

The 18-year-old secured a spot through her performance at the Aquecce Rio Test Event, the final qualifying event for the Rio games at the HSBC Barra Olympic Arena . She joins Kieran Behan who also qualified on Saturday.

Speaking of the achievement from Rio, Gymnastics Ireland CEO, Mr Ciaran Gallagher said - “Ellis has made history for Gymnastics Ireland by qualifying to the 2016 Rio Olympic Games. This is a huge step forward for our women’s programme and in becoming the first Irish female gymnast to qualify to an Olympic Games Ellis’ achievement will serve to inspire to all the young up and coming Irish gymnasts who will want to follow in her footsteps.

“The focus for Ellis and coach Sam James now shifts to the summer Games where she will join Kieran Behan in flying the Irish flag at the most prestigious competition in our sport. It was an ambitious target set by Sally Filmer, our Performance and Technical Manager, four years ago to qualify one male and one female gymnast to Rio but today it is a target achieved. On behalf of our organisation I would like to congratulate Ellis and Kieran on this great achievement.”

O’Reilly’s all-around performance (98th out of 192 gymnasts) at last year’s World Championships was good enough to earn her that historic slot in the final qualifying event in Rio over the weekend. Still a student at Chisleworth School for Girls in south London, O’Reilly trains out of the Europa Gymnastics club in London and is coached by Sam James.

The young Londoner trains from 4-8pm after school every day plus Saturdays. She is currently doing three A-levels and hopes to study physical education in the University of Greenwich next year.

O’Reilly, who qualifies for Ireland through the ‘granny rule’ thanks to her grandfather who is from Armagh, said after the event that she was “absolutely delighted” with her performance and history making result.