‘Irish boxing imploding? No, this was world boxing’ 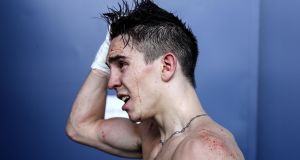 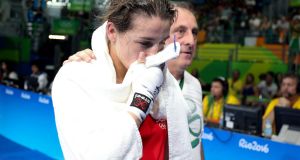 A disappointed Katie Taylor after her loss to Finland’s Mira Potkonen in Rio. Photograph: Dan Sheridan/Inpho

Before the Olympic Opening ceremony had even taken place Irish coaches Zaur Antia, Eddie Bolger and John Conlan slipped out of the Rio hotel where the boxing draw was taking place and onto a waiting bus. Within seconds the bus was surrounded by television crews and reporters.

News had filtered through that Michael O’Reilly, the Irish middleweight, had tested positive for a banned substance. The media had heard of O’Reilly’s problem before the coaches. O’Reilly’s name was still in the draw. Disarmed, they sat on the bus unable to say anything.

That news arrived shortly after Irish boxing official Seamus Kelly alerted the world to his view that Olympic boxing was fundamentally corrupt and nothing short of regime change and the removal of its president Dr Wu could change the sport.

The allegation was that a group of referees and judges got together before major championships to decide who would win.

Just over a week later bantamweight Michael Conlan lost a decision to Russia’s Vladimir Nikitin, who was unable to line up for his next fight because of a cut.

That and other blatantly bad calls in the ring prompted the governing body, the AIBA, to roll some heads. They stood down an unspecified and unnamed number of its judges amid the cries of corruption.

But the clamour over the judging became louder as federations wanted to know if those judges were responsible for their boxers losing fights.

So another head rolled. On Thursday the AIBA said it was reassigning its executive director, Karim Bouzidi, with immediate effect following an emergency board meeting. That day the Canadian federation also fuelled the crisis by issuing a statement.

“Following questionable decisions and alleged corruption claims occurring at the Rio 2016 boxing competition, a global strategy is being put in place to pressure AIBA into addressing and correcting the situation,” it said.

None of it will help Katie Taylor or Conlan. But before things unravelled, there was a feeling that O’Reilly’s positive finding and Kelly’s claims had by association jaundiced the Irish team at various levels.

Nothing uncomfortable was said to the boxers or coaches, but they have been around the sport long enough to sense the lie of the land and understand what works for and against teams.

“We heard it from an IABA official,” says Bolger of O’Reilly’s positive test. “They said one of our boys has tested positive. My recollection then was we are in big trouble.

“I’m not saying this happened but what popped into my head was there will be no medals on the table for us. That was my thought. It wasn’t good.

“We felt that around the athlete’s village. But everybody was very good to us. I don’t know how they felt inside. I can only tell you how we felt and we felt embarrassed.

“There was that fear that you were not going to breeze through an Olympic Games. If it had happened a month before or after . . . but the day of the draw, it was hard to recover from.”

The coaches reject any claims that the boxers were not prepared correctly either physically or tactically. They were confounded by the decisions, especially of Conlan’s and Taylor’s.

Prior to Rio, they brought over Kazakhstan. They had bouts with Britain, India, Germany and France.

They don’t believe the boxing team imploded as they fell out of the draw one by one. In the men’s draw, world champion Conlan, double Olympic medallist Barnes and double European champion Ward were beaten, as well as defending Olympic champion Taylor.

They also concede it is too easy to make excuses after being beaten. But some of the decisions were just too stinky in a climate of distrust and recrimination.

“Here was a statement from Seamus Kelly, the referee,” says Antia, the Georgian who lives in Bray and is now an Irish citizen. “This is my opinion. He announced this big corruption. They do this. They do that. Everybody saw this.

“What I’m thinking is our boxers’ close fights, they are losing, and other boxers close fights they are winning. Paddy Barnes fight. Three times an Olympian. World Champion WSB . . .

“Good lessons have been learned for the future,” he adds. “Not only for Irish boxers but all different countries. What happened will make us wake up. Next time when the boxers are dreaming of gold medal they will not be robbed.”

Bolger is not concerned how he or Antia will be viewed, or about the implied criticism through the re-emergence of stories relating to the departure of Billy Walsh to America.

Antia also rejects that there is a lack of leadership. He pulls out his phone where he has kept the fight stats. He cites the competitions he has been to with Irish boxers, not least last year’s World Championships in Doha, where Conlan became the first Irish male boxer to win a gold medal, with Joe Ward winning a silver medal and O’Reilly bronze.

“Look here,” says Antia pointing to his phone as Bolger recounts them by heart. Boxing is, explains Bolger, a game where if you land more punches than you receive, then you win. But Rio was not Doha.

“We have come to a situation where we are saying fights are close or we didn’t perform,” he says. “If you penalise Usain Bolt because he only wins by five hundredths of a second and you say that’s not good enough anymore, then where are we going.

“We knew Katie’s would be a physical fight. She clearly won the first round, clearly won the third round and the fourth was close but she won it too. The stats show Katie landed 14 more punches than that girl. There are question marks there.

“Michael’s was a landslide on punches landed. Roughly it was 93 punches to 60 odd, about a third more. Katie was 53 to 39. Right hands, left hooks, right hands left hooks. Movement was good, sidestep was good, single punches were good. Very shocked the Finnish girl got the decision.”

The declaration of the Canadian boxing federation and their statement claiming that the sport is in jeopardy, combined with the rolling heads in the AIBA, is both comforting and disquieting.

There is finally recognition of a festering problem but at the same time concern remains that nothing real is being done to fix it, because the regime itself is also being questioned.

“Hopefully something good will come out of this. Reform so we can start promising young boxers we can get you in the best shape and you will get what you deserve when you go to the major tournaments. At this point in time there is a big question mark over that.”

The Irish Athletic Boxing Association (IABA) will carry out a full review of the boxing performances in Rio. But they have also questions to answer. It would be helpful if Pat Ryan – chairman of the IABA and the coach of O’Reilly – publicly clarified his position in relation to his boxer.

The IABA also need to find out who it was allegedly gave O’Reilly the contaminated supplement and why he believed, despite educational programmes, that it was safe to take.

The ‘tapering camp’ outside Rio that the Irish team travelled to before the Games began was also entirely unsuitable, almost absurdly so. Airplanes were taking off or landing every few minutes. The team stayed there one day before leaving.

“Who the hell signed off on that? Who visited?” says Bolger. “Did someone not see jumbo jets taking off every 55 seconds because I timed it. Also would you not ask the question is there hot water here?

“There wasn’t a gym. A taper camp is to reduce mental fatigue and physical fatigue. We’d no hot water. No bed sheets. The beds were seven feet from the floor. It wasn’t good.”

For the boxers and the federation it has been a journey but one most won’t want to look back on again. The end of the Rio Olympics also means that few, including Conlan who will join his brother Jamie as a professional, will ever have the chance again of righting a wrong.