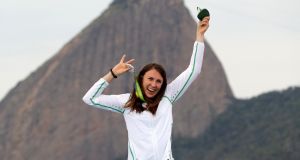 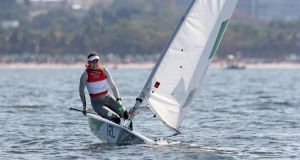 Ireland’s Annalise Murphy in action during the medal race of the Laser Radial class in Rio, where she won a silver medal. Photograph: Martin Rickett/PA Wire 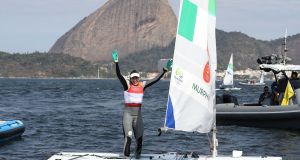 Annalise Murphy didn’t know whether to laugh or cry after banishing the pain of missing out on a medal in London in 2012 with a brilliant silver after the final race of the women’s Laser Radial on Guanabara Bay in Rio .

The 26-year-old from Rathfarnham moved from bronze to silver after finishing fifth in the medal race, pushing Denmark’s Anne-Marie Rindom into third spot overall.

Marit Bouwmeester of the Netherlands claimed the gold medal after winning silver in London four years ago.

Murphy’s success is Ireland’s first medal in sailing since David Wilkins and James Wilkinson won a silver in the Flying Dutchman class in Moscow back in 1980 and second silver on the water in Rio after Cork brothers Gary and Paul O’Donovan’s success in the lighweight doubles sculls in rowing .

Murphy showed scant regard for the warnings over the quality of the water in Guanabara Bay by diving in to celebrate before coming ashore to be greeted by family, friends and a large gathering of Irish support. 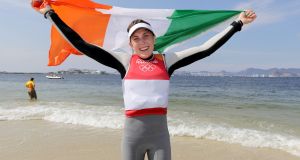 Gallery: Images of the Day

“It’s amazing, this time four years ago I had just finished fourth and it was the hardest day of my life, but I said I was going to come back and try to get a medal. So to actually go and do it, it’s incredible,” Murphy told RTÉ.

“I was really happy, I don’t know whether I’m laughing or crying, I was just so happy with how I sailed this week and that last race I just put everything together really well and I’m over the moon.

“I didn’t think that I was going to be in this position, even a few months ago I was sailing really badly, so to be able to come and do it when it really mattered is incredible.”

Murphy admitted that she didn’t change her tactics going into the final medal race, where double points were awarded, and was able to enjoy the final leg of the race knowing that she had a medal in the bag, even though she didn’t know what colour at that stage.

“I knew that I just had to treat it like every other race that I’ve done this week. I was scared that I was going to end up losing out and so I just went and attacked the race and it worked out well for me.

“At the last top marker I knew and then after that it was just whether it was going to be gold or silver. I kind of relaxed a little bit at that stage.”

Murphy’s family were all on the beach supporting her after her brother Finn was able to change his flight following the postponment on Monday.

“The whole family are here, they’re incredible, and everyone back home in Ireland, all my friends and family that have supported me since I’ve been doing this, it’s just amazing.

“It’s amazing for Irish sailing, we haven’t won a medal since the Moscow Olympics . Hopefully I can inspire a new generation.”

1 Game Changers: Living beyond fear puts Alex Honnold above all others
2 Could lack of sex force players to break the NBA’s bubble?
3 O’Brien demands action on ‘stone-age’ riding tactics
4 TV View: Proper Irish wake for Big Jack, the man who gave the nation notions
5 ‘Jack used to call me his official grasshopper keeper. We had a great time’
Real news has value SUBSCRIBE