Victory over major Test-playing nation is the target at Clontarf 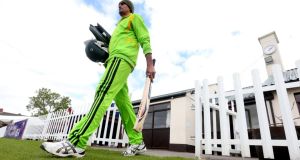 
Although World Cup qualification remains at the forefront of summer ambitions for Ireland, a first victory over one of the major Test-playing nations on home soil is the target in the two RSA Series One-Day games against Pakistan, the first of which gets under way at Castle Avenue, Clontarf, this morning (10.45am).

It’s over six years since Ireland’s breakthrough win against Pakistan at the World Cup in 2007, but despite a couple of great chances against England and Australia in recent years, the elusive first home victory has slipped through their hands.

Ireland coach Phil Simmons is confident it’s just a matter of time before the breakthrough comes. “We haven’t beaten a high-class full member here at all. It is about time we started,” said Simmons, who pointed to the limited time with the squad in the build-up to home games as a drawback.

“It’s always a little bit more difficult when we are at home and to have the guys for a day, or maybe two days in this case, to get the kind of momentum and sharpness that we need. The good thing about it is that all the guys have been playing cricket, with the interpros here, and county cricket, so everybody should be sharp enough.”

One player in the form of his life is seamer Tim Murtagh, whose 30 wickets have led Middlesex to the top of the County Championship and the 31-year-old is determined to open his wicket-taking account in his third ODI for Ireland.

‘Stop-start career’
“It was a big thing for me coming across and being a bit of an outsider, I suppose,” said the London-born Murtagh. “It’s been a bit of a stop-start career with Ireland so far but hopefully I can try to cement my place in the team and put in some performances like I’ve been doing for Middlesex, just try and transfer that over to Ireland.”

Murtagh was delighted to see a tinge of green on the pitch for this morning’s game, something that plays to his strengths as a bowler who can move the ball both ways.

“I’ve played here a couple of times and it’s always been a bit seamer-friendly, but it does turn as well, especially last year against Afghanistan. So yeah, I’m looking forward to taking on Pakistan, they are a world-class team but they are the kind of teams we have to look to knock over if we’ve got ambitions of going further.”

Pakistan are in Ireland to prepare for the Champions Trophy, having beaten Scotland by 96 runs last Friday before the second game on Sunday fell victim to the rain. Skipper Misbah-ul-Haq rescued a mediocre batting display with a knock of 83 not out off 80 balls, with left-arm seamer Junaid Khan and spin wizard Saeed Ajmal taking three wickets apiece as Scotland were skittled for 135.

Misbah expects a tougher challenge today and in Sunday’s second game and will lead a full-strength side on to the pitch that is likely to include 7ft-plus opening bowler Mohammad Irfan. “You can easily say Ireland are a good team. They surprised a few teams at the World Cup also, so we are also looking forward to just playing our full strength and to win the games,” he said.

1 Stephen Kenny replaces Mick McCarthy as Ireland manager
2 Matt Williams: The economic earthquake for European rugby is coming
3 Simon Zebo: ‘It’s been tough not being able to put my hand up to play with Ireland’
4 Pat Critchley: ‘You teach or coach the person first and the subject or the game second’
5 Liverpool place some non-playing staff on furlough
Real news has value SUBSCRIBE