Home is where the heart is for Cleveland prodigal LeBron James 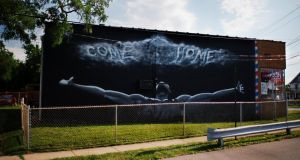 A mural of LeBron James reads “come home” on the side of a barbershop in Cleveland. Photograph: Dustin Franz/New York Times

Among the beautiful people expected to turn up in Rio for tomorrow night’s World Cup final is the superstar whose homecoming has been subject to frenzied speculation, tears and furious debate.

No, no, not the crooner in the stetson hat. Brazil has suffered enough.

Those who finally despaired of Ireland as a serious country this week might take consolation in the maelstrom of excitement which has followed LeBron James throughout the week. Thousands of Clevelanders wake up this morning after celebrating late and hard the news that their unassailable local hero has decided to forsake the dazzle of Miami for the humble charms of Cleveland and its long suffering Cavaliers. The announcement must have provoked disbelief, delight and relief and made the will-he-won’t-he anguish of the previous 48 hours worth it.

With James, however, saying yay or nay is a global event. When he decided to leave Cleveland for Miami four years ago, his announcement was carried live by ESPN, who dubbed it “the Decision” and the choice of words, “I’ve decided to take my talents to south Beach”, became a coda for vanity and ego unchecked. James departed his home state – he grew up in the Akron – leaving millions of anguished fans in his wake. Dan Gilbert, owner of the beleaguered Cavaliers (a solid team which has never won an NBA title) published an open letter branding the exiting superstar as cowardly and narcissistic. James was more than just a luminous personality in a city which does not trade on glamour: he was a crucial part of the local economy.

By quitting Cleveland to join the Miami Heats’ stellar cast

the pressure was on James to deliver. Anything less than NBA championships would lead to vilification and the judgement that James, for all his athletic splendour and his facility to play any position brilliantly didn’t have the winning temperament. Back-to-back championships (2012-13)featuring dominant fourth-quarter takeovers by James ended that myth but the absolute schooling which Tim Duncan and the San Antonio Spurs gave the Miami Heat in the NBA finals in June reignited questions as to James’s legacy in the sport. That he is among the shortlist of best players to take up a basketball is beyond question. But where among them does he rank? When compared to the San Antonio Spurs, the Miami Heat story began to look shallow. The Spurs have been revolving around Duncan since 1997, an eternity in modern sport. Over time, they have achieved the rare feat of looking like a group of friends playing basketball and just happening to be better at the game than any other team in the world. Within Miami, there was a support cast and three mega-personalities who could just about fit in the same building.

So when James decided to invoke his opt-out clause this summer, the speculation was instantaneous. If he was to leave Miami, there were two obvious teams for him to join. The first was New York, a city which could easily absorb his megawatt persona and give him an opportunity to lead the Knicks to its first NBA championship since 1973.

The other was to return to Cleveland for what will be a remarkable homecoming. The Cavaliers began shifting the furniture, clearing players to leave space within the salary cap to pay James $20.7 million next season. Beyond the boardrooms, the fun started. Crowds began to assemble outside James’s home in Bath, Ohio, and photographs emerged of trucks removing his cars from his Miami pad, all taken as proof that he was quitting Florida. But his evasiveness was in contrast to his last move. James, possibly in a mischievous streak, said precisely nothing about his intentions. The big man went to ground. In doing so, he inadvertently pressed pause on NBA off-season trading. Chris Bosh, for instance, could not decide on joining the Houston Rockets until he knew that James was leaving Miami.

With with every passing hour, the certainty that James was preparing to return to Cleveland was deeper set and the likelihood that he would jilt the city twice, by exercising his free will, receded with it.

James is a contradictory character.

In some ways he courts attention, with the on-court preciousness whenever he is fouled and the incessant cribbing at referees. He is a scoring machine who is often not selfish enough. But off the court he is courteous and grounded and is a perfect NBA role model.

Yesterday, he made his decision in a manner more in keeping with his personality: by way of a first-person interview which appeared on Sports Illustrated’s website. In a few paragraphs he made clear that just because he left Cleveland didn’t mean he forgot about the place.

Returning to Cleveland is a brave and smart decision. When he left four years ago, the general assumption was that he was gone for good. The infamous letter penned by Gilbert disappeared from the club’s website in recent days. For James to return to play under Gilbert will mean swallowing his pride.

The Cleveland Browns have never won the Superbowl. The Indians have not won the World Series since 1948. The Cavaliers appeared in the NBA finals just once, when James led them there in 2007 only to be swept 4-0 by San Antonio. James is 26 years old now and has time enough to assert himself as the greatest of all time. This weekend he makes Cleveland the envy of the basketball world.

So LeBron James will take a limousine through Rio for the final and maybe he will think about how sport and athletes can influence a city. It can’t be a bad feeling to have the power to make an entire city of people feel great about who they are and where they live.

You can’t go home again. But there are exceptions.