Has Conor McGregor lunged too far in Dana White negotiations? 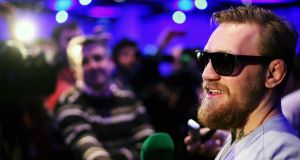 Conor McGregor is yet to reveal the reasons behind his retirement from UFC. Photograph: PA

Who expected this? Conor McGregor pulled from UFC 200. In truth, there have been rumblings in the bowels of the volcano for six months or more now, even if nobody expected the sky to go this dark.

Let’s rewind three years and his UFC debut. The fight was quick, even quicker was the way he advertised his ebullient nature to the world. And his business acumen. Everybody knows the quote. “Hey, Dana, sixty g’s, baby!” He was duly granted his knockout of the night bonus and he swallowed it without chewing. On to the next fight.

McGregor’s career now is something more akin to an extravagant medieval banquet, built on his extraordinary ability to promote fights, predict their endings and - bar the Nate Diaz defeat - bludgeon those predictions into reality. His self-proclaimed monkey arms have always given him a clear advantage in the featherweight division but it’s in prospecting for future riches where his reach is unparalleled in the history of the sport.

The question is: has McGregor lunged too far in his negotiations with Dana White and the Fertitta brothers?

On Tuesday, White said the Dubliner had been pulled from the promotion’s marquee event of the year for refusing to fulfil his press obligations later this week in Las Vegas. McGregor is in Iceland training with team-mate Gunnar Nelson. It’s just over a week since the death of Portuguese fighter Joao Carvalho, whose collapse in the octagon was witnessed by the Dubliner.

We can speculate on McGregor’s state of mind, and imagine it has had better days. We can take White at his word or we can remind ourselves that White is an accomplished spin doctor, when the mood takes him. Let’s speculate on that mood.

It now seems clear it was never about belts for McGregor. Merely a means to an end. “I don’t care about the belt,” he told his opponent Nate Diaz in late February. Okay, that wasn’t the exact quote. Try colouring it blue. Six months earlier he had appeared on Ariel Helwani’s MMA Hour podcast, where he offered a gambit that illustrated the breadth of his ambition. His next contract would be nine figures long, he said. “All the belts mean nothing,” he told Helwani. “Numbers rule in this game and I’m the ruler of the numbers.”

In December he polished off Jose Aldo and delivered his impression of Floyd Mayweather (or was it Barack Obama?) as he stood before the assembled media, imperious in his burgundy-coloured suit. He thanked the journalists for their hard work; he flawlessly listed the financial achievements of the night; and he congratulated the UFC. He gave the impression of being completely in charge.

A month later, his superfight with Rafael Dos Anjos was announced and in a typically exuberant Facebook post, the Dubliner described it as a “McGregor Inc executive business decision”.

It’s probably fair to say White hasn’t been in a good mood for a while.

Pre-196 he gushed about McGregor: “You don’t pick up the phone and have conversations with fighters that you have with Conor McGregor. He will literally fight anybody. There’s no reason for me to make this shit up. This guy is the real deal.”

He’s more guarded now: “I respect Conor as a person and I like him as a fighter,” he said on Tuesday.

Among others, Chael Sonnen and Josh Barnett believe that contract negotiations between the UFC and McGregor have finally turned sour. The far-fetched version portrays Dana White as Frankenstein hunting down his monster. Nobody knows how much McGregor wanted for his rematch with Nate Diaz. Did he want $10 million or did he want $15 million? Or more? On this subject, he has often mentioned Mayweather’s name. What we do know is that in a notoriously low-paid sport, where men dedicate their lives to endless hours of training and then put their lives at risk in a cage, the Dubliner has broken boundaries and broadened the horizons of his peers.

Conor McGregor has tweeted that he is “retiring young” and we don’t really know why. And we are still not sure why he’s been pulled from UFC 200. But if money makes the world go round, it can also make the world of MMA stop dead in its tracks.