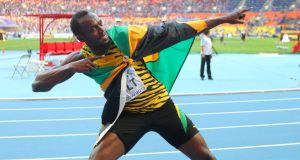 Usain Bolt celebrates his victory in the 200 metres at the World Championships in Moscow. Photo: Dave Thompson/PA

Just when it seemed plausible to get one last Christmas out of giving friends a cassette tape mix of my favourite running tracks, along came Spotify and ruined it for everyone. Who’s going to appreciate the carefully timed selection, neatly fitted on either side of a C60 cassette, when it can all be done now with a little dragging of the mouse?

Of course these tracks were never intended to be played while actually running: with the possible exception of carrying a bottle of water while running, nothing looks more stupid than someone running while listening to music, especially on a treadmill. Thankfully this spoiling tactic is now banned by most race organisers, and should soon be made a public offence.

My cassette tape mix was always intended to be played before or after a run, depending on the need for motivation. There’s still no better background music to the final lacing up of the running shoe than Jean Michel Jarre’s Oxygène Part IV. A little bit of Keith Richards on his telecaster works well too, as long as the tape doesn’t run out before it ends. Now, the cassette tape mix suddenly outdated, comes the dilemma of selecting that present for the running friend: , which really only leaves the other old reliable – my favourite running books.

Biggest names
This year we’re spoilt for choice, given recent autobiographies from the two of the biggest names in athletics – Usain Bolt and Mo Farah. Celebratory, uncontroversial and predictable they may be – but they are still recommended reads.

Bolt, fittingly, was first out of the blocks with Faster Than Lightening.

No one needs much reminding of how Bolt dominated both the Beijing and London Olympics, and after solemnly reminding us too of his near fatal car accident in early 2009, he does make some unusually honest admissions about his eating habits in Beijing, thanks to a popular fast-food franchise at the Athletes’ Village.

“I’m getting some chicken nuggets,” he thought to himself one morning. “At first I ate a box of 20 for lunch, then another for dinner. The next day I had two boxes for breakfast, one for lunch and then another couple in the evening. I was there for 10 days, which meant by the time the Games ended, I must have eaten around 1,000 chunks of chicken. Man, I should have got a gold medal for all that chowing down.”

That gorging helped fuel three gold medals and three world records! Bolt retains thatsort of light-hearted tone throughout the book – even when it comes to the serious issue of drugs. Faster Than Lightening runs up to and including last summer’s World Championships, before which two of the other biggest names in sprinting – Tyson Gay and Asafa Powell – both failed a drugs test, while questions were also emerging about the drug testing regime in Jamaica. Bolt doesn’t completely ignore the issue, admitting he “wouldn’t even touch caffeine” and claims he was once tested three times during a single trip to Germany –adding that he “couldn’t even disappear for a holiday without telling the guys in charge”. He’s reluctant to comment on either Gay or Powell, given both those doping cases remain ongoing, and while almost everything about Faster Than Lightening illustrates the freaky talented athlete Bolt is, it’s slightly surprising he doesn’t really tackle the Jamaican drug testing, which ultimately protects his reputation.

In Farah’s book – Twin Ambitions – the drugs issue is not addressed at all. It is a far more personal a tale, his move from Somalia to Great Britain at the age of eight, leaving behind his twin brother Hassan, the more pertinent issue to address, not that the obstacles to success ended there. “All we had to do was turn up at the consulate, hand over our passports, and have an interview,”

Passports back
Farah recalls, not of his move to Britain, in 1991, but of his move to the US, with his own family, in 2011. “Instead, the staff immediately handed our passports back, along with a piece of paper which more or less said we were being investigated by the FBI, because my passport stated that I was born in Mogadishu”.

Without the timely intervention of his sponsors, Farah’s move to the US might never have materialised – nor, in turn, the two gold medals he won at the London Olympics, and last summer’s World Championships.

Farah had no issue whatsoever about Alberto Salazar taking over as his coach, when moving to the US, despite Salazar’s somewhat questionable background on doping methods.

Instead, Farah puts his 2011 breakthrough down to Salazar “pushing me to breaking point, to the extent my body simply couldn’t handle it – in a good way, of course”.

This conflicts slightly with the Farah of 2008, who blames his failure at the Beijing Olympics on “over-training”. Although Farah, unlike Bolt, sees no conflict in fuelling himself with caffeine before races, describing how, 20 minutes before his 10,000m in London, his downs not one but two espressos, and “feels this massive caffeine high come on... my hands, my legs, everything shaking”.

In the end both these books shouldn’t disappoint my running friends, but what disappointed me was Bolt and Farah running so clear of the drugs issue, as if they see or hear nothing about it.