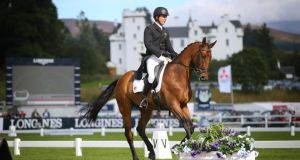 British riders top the team and individual standings following the first day of dressage at the Longines FEI European eventing championships at Blair Castle in Scotland.

Nicola Wilson, riding the Irish-bred One Two Many, and Kitty King on Persimmon were on a combined penalty score of 71.50 ahead of France 75.50 and defending champions Germany 76.60. Second into the arena in the morning session, Joseph Murphy was disappointed to have had a couple of errors with Sportsfield Othello for a score of 50 which, combined with the 46.60 penalties of team debutant Padraig McCarthy on Simon Porloe, left Ireland in fifth position overnight, just behind Sweden (91.40).

Britain’s Holly Woodhead (21), making her championship debut, tops the individual leaderboard on 31.70 riding DHI Lupison, an 11-year-old Lupicor gelding which was bred in Co Tipperary by Noel Ryan out of a thoroughbred mare by Mon Tresor. Recent Burghley winner Michael Jung, the reigning champion, lies in second place for Germany on fischerTakinou (33.50) with Wilson in third.

Riding as individual for Ireland, Co Carlow’s Sam Watson on his own Horsewell Lukeswell occupied 12th spot overnight with McCarthy in 15th place and Murphy 20th. The second Irish individual, Camilla Speirs, who was second last into the arena on Thursday afternoon, was in 29th position on Portersize Just A Jiff (53.90). The second session of dressage starts this morning at 10.20 with Irish team riders Michael Ryan (Ballylynch Adventure) and Austin O’Connor (Balham Houdini) due to compete at 11.16 and 15.04 respectively.