George Dockrell Diary: Losing to India was a big blow but now it’s all about beating Pakistan 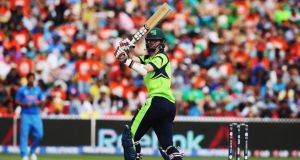 It has been a whirlwind week travelling from Canberra to Hobart to play Zimbabwe and then on to Hamilton to take on India. We will have completed our sixth flight for the week today which has really taken its toll on us physically.

We moved on quickly from the tough defeat to South Africa as we knew how important the Zimbabwe game would be. They are ranked higher than us, however, I think we are two very evenly matched sides. Having lost the toss and been put into bat, I feel we did superbly well to post 331.

The pitch was quite slow and sticky when we batted so credit to Ed Joyce and Andy Balbirnie for playing so well on a pitch that got better under lights. Joycey is the old pro of the team and he showed his class with a little bit of luck to help!

I have spoken a lot about Andy in my pieces so far so it’s been fantastic to see him back up his maiden World Cup half-century against South Africa with an even better score.

He caressed his first ball for four through the covers and continued on with some lovely power-hitting and innovative strokes at the end of his innings. He deserved a century but I have no doubt it won’t be long before we see him get one.

I haven’t played in many games that have been so evenly balanced throughout the second innings. We took early wickets and looked promising with the new ball which has been an issue up to now. That is a key part for us if we want to progress. However, Brendan Taylor, the Zimbabwe captain, played extremely well and almost took the game away from us.

I have played against Brendan since 2010 and he is an immensely talented batsmen which he showed by striking the ball well from the start, so I enjoyed the battle of bowling to him again.

Alex Cusack changed the game for us, getting the prize wicket of Brendan, and when Kevin O’Brien got the in-form Williams out it looked to be our game. But credit to Zimbabwe, they didn’t stop fighting and Mupiriwa, the Strabane pro, hit 14 off three balls to leave a tense last over with them needing seven from six balls with two wickets left.

Our death bowling has been our weak link in the previous three games but Alex justified his selection with a strong spell, including overs in the power play and at the death. Defending seven runs is a tough task, especially on a good wicket, yet Alex only gave away one run and took both remaining wickets. The atmosphere in that last over was electric but we kept our heads and Alex, combined with the ever safe hands of our captain William Porterfield at long on, brought it home for us.

You could see from the reaction that we were elated to come out on the right side of another tight game. It meant a lot to us to beat Zimbabwe. Getting three wins out of four games was fantastic and kept us in contention.

When we arrived in Hamilton we were treated to a traditional Maori welcome which certainly was a new experience. However, we only had one day between travelling and playing so the time was used mostly for recovery and getting into the right mindset.

The crowd at Seddon Park in Hamilton was phenomenal with a packed stadium full of fanatical screaming Indians and some Irish too. Playing India in a World Cup is an experience in itself so you have to enjoy the electric atmosphere.

The game was a lot more one-sided than we would have wanted. We had come off the back of a tough travel day flying from Hobart to Hamilton via Sydney and with a few hours on buses added in.

The guys were clearly lethargic. This isn’t an excuse for how we played but it definitely was a factor.

We struggled to contain the explosive batting line- up of the World Champions on a very small ground and without enough runs on the board.

We started well with the bat but managed to lose wickets at key times, especially in the last 15 overs when you need wickets in hand. This meant that instead of posting 320 from where we were, we only mustered 259, which was about 60 runs below par.

In reply, India were clinical, only offering a couple of half-chances in a dominant opening partnership that took the game away from us. We were in a tough place, needing wickets to win so we had to continue attacking which gave them opportunities to score.

Stuart Thompson impressed after his first over and took the wickets of centurion Dhawan and Sharma. For the rest of the bowlers, it was a game to put behind us.

It was a big loss but India are World Champions for a reason and, with the second best record for consecutive wins in World Cup history, they will take some stopping.

We now know our last game against Pakistan is the decider. We travel early this morning to Adelaide to prepare for our most important game of this World Cup.

The support has been immense so far, both at the games and back home, so I hope that continues and helps us get that fourth win and a place in the quarter-finals.

Prendergast praises Hughes as Armagh rider crowned British champion jumps jockey 16:28
JP McManus Pro-Am postponed for 12 months 15:55
Five YouTube channels to get your fix of sporting nostalgia 14:58
La Liga could lose €1bn in revenue if season does not restart 14:09
US prosecutors say Russia and Qatar bribed Fifa officials in World Cup bids 13:07
Here is your handy guide to sport on television this week